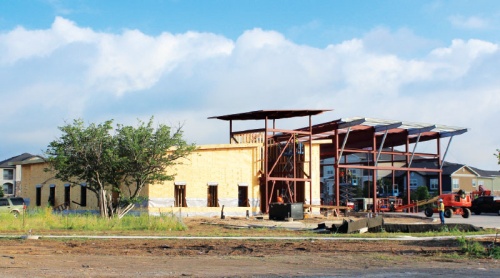 A new fire station for the Onion Creek Area, located at the intersection of FM 1626 and Old San Antonio Road, could be completed this fall.

Although Austin City Council and staff have known for three years about a fire station shortage affecting five areas of Austin, city leaders have just determined and funded a plan to fill the immediate need.

South Austin neighborhoods of Travis Country and Goodnight Ranch, as well as the Del Valle, Davenport Ranch along Loop 360 and North Austin’s Canyon Creek neighborhood, each have fire department response times roughly between 12 minutes and 16 1/2 minutes. The national standard—from the time the dispatcher takes the call to a unit arriving on scene—is under 8 minutes for 90 percent of calls.

On May 24, City Council adopted a resolution directing staffers to create a timeline to fund, build and staff five new fire stations. On June 14 council members approved a resolution to build five permanent fire stations in the five areas by 2023. Council also approved $6 million for station design and land acquisition. Council set a goal of starting construction on the permanent fire station in the Del Valle area within 12 months and in Travis Country within two years.

Fire station construction to serve the Onion Creek neighborhood, which was funded through the city’s 2012 bond program, began in 2017 and could be completed this fall, according to Austin Public Works spokesperson Matt Hart.

Bob Nicks, Austin Fire Department battalion chief, who also serves as president of the Austin Firefighters Association, said the association mailed fliers to Austin residents in May to alert residents of the need for more fire stations.

“A lot of citizens don’t realize when the response times are slow and the effect it can have on them,” he said. “Citizens put a lot of trust in the fire department that we will take care of business.”

Nicks said a station has been needed in Travis Country for 20 years, and there had been little effort to get the station built until now.

“The city has not made it a priority to find the money to do it,” he said.

For the city of Sunset Valley, which receives service from AFD, the Travis Country station could help response times. Sunset Valley Police Chief Lenn Carter said he spoke with AFD on May 21 about possible locations for the site.

Hart said AFD determined the need for the station near Onion Creek in 2012 based on long response times and the far distance from existing stations. The area has experienced increased incident volumes and response times for several years, he said.

Nicks said the Loop 360 station would serve Davenport Ranch, Lost Creek and vehicular incidents on Loop 360. It would also be key in fighting potential wildfires.

Some council members have blamed the need on poor annexation policy by the city. Austin annexed the five areas included in the resolution between 1997 and 2015 but did not follow up in providing the proper public safety services.

District 2 Council Member Delia Garza, a former Austin firefighter, blamed council inaction on a mix of bad policy, lack of political will and bureaucratic stagnation. She said she would no longer accept budget constraints as an excuse.

In 2015, Nicks said AFA funded a project to update a model that showed where AFD’s deficiencies are and took those results to City Council, which approved a resolution in March 2016 to start looking into the fire station shortage.

The issue of inequitable public safety service was reignited after council learned in late 2017 that some residents in shortage areas were receiving increased home insurance premiums due to their distance from a fire station.

AFD aligns its goal with the national standard of responding to 90 percent of calls within 8 minutes.

Fire Chief Tom Dodds said the 8-minute window is crucial in containing a structure fire to its room of origin. He said a fire can double in size every 60 seconds, and heat rises at about 90 feet per second, or roughly 60 miles per hour.

However, fire department responses are not limited to fires. According to numbers from the fire department, more than 67 percent of the department’s calls are medical. Dodds said because of the number of fire stations, the fire trucks can get to a call faster than emergency medical service vehicles, and responders can begin critical life-saving intervention such as CPR, applying a defibrillator or controlling bleeding.

“Time is of the essence,” Dodds said. “Every citizen in Austin deserves and should receive the same standard of coverage and response regardless of where they live.”

“We have many places in the city where we have adequate station coverage, but we’re still not meeting our response times in those areas,” he said. “Those are mostly from congestion issues. That can be solved, too, with emergency signal preemption [software].”

In May, the Capital Area Metropolitan Planning Organization approved funding for this software in its 2019-22 Transportation Improvement Program. Nicks said the software will allow the city to anticipate where the fire truck will be and change traffic signals to green lights in anticipation of a truck going through an intersection.

Garza said the issue has given her new perspective as council heads into budget season. She said she aims to make sure the city will adequately provide the most basic services to all residents in the city first.

“It’s mind-boggling to see how this has become such a challenge when it’s just a basic thing we should be providing as a city,” Garza said.
SHARE THIS STORY