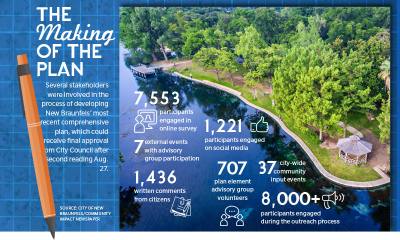 Several stakeholders were involved in the process of developing New Braunfelsu2019 most recent comprehensive plan, which could receive final approval from City Council after a second reading Aug. 27.

The creation of the plan, which serves as a non-regulatory framework document that future city initiatives will feed off of, involved input from more than 8,800 stakeholders.

“It’s based on intense citizen engagement,” said Christopher Looney, the city’s planning director. “We wanted to get everyone together in our community in different formats and conversations to learn what they would like to see in New Braunfels and take that information, and then that becomes the comprehensive plan.”

Ian Perez, a six-year New Braunfels resident who served on the transportation advisory group for the plan, said he saw his participation as a chance to help lay the groundwork for the city’s future.

“It’s going to change the direction of everything,” he said. “The opportunity to engage and be part of that should be important to anybody who is living here or working here or wants to be part of anything in New Braunfels.”

Through the assistance of a consulting firm, nine key areas were identified to be addressed in the comprehensive plan based on the city’s unique characteristics.

“Our areas are different than, say, El Paso’s might be,” Looney said.

From there, citizen-composed advisory groups were formed surrounding each topic, and anyone with an interest to participate was welcomed to join. A nine-member steering committee oversaw the entire process, and information was also collected through public events and online surveys.

Ron Reaves is a former City Council member and previous New Braunfels ISD superintendent who oversaw the steering committee. He said the group helped refine the wording from citizen comments to identify goals. Each goal was targeted to meet elements in a set of plan strategies.

“What is it that makes [New Braunfels] great now, and will make it even better down the road? And to maintain that sense of community during that aspect of time,” Reaves said. “...  I think that’s a lot of what this comprehensive plan is all about.”


Highlights from the plan

The location and density of commercial and residential development are key elements in the plan.

“A new future land-use plan is what seems to be really important right now,” Looney said. “... We have historically in New Braunfels had a more traditional land-use map that was real explicit, and so it looks like the guidance from the community is something a little bit more flexible to accommodate the speed with which we’re
growing.”

According to Looney, all nine advisory groups mentioned sidewalks as a key focus area.

“I think they’re thinking about connectivity and being able to get safely from one place to another.”

Leveraging more citywide partnerships to arrive at solutions is another initiative citizens would like to see more of, and the plan also stresses regional collaboration.

“When we think about a comprehensive plan, people think it’s just the city, but it’s more than that; it’s everyone,” Looney said. “... We’re collaborating with each other, whether that’s economic development or growth or transporation—we can work together.”

The city’s parks and natural resources are another priority called out by community members, with an expressed desire to increase the number of parks per capita. Affordable housing is also outlined in the plan, but Looney said ideas surrounding that initiative remain to be identified.

On July 9, Looney gave a presentation of the plan to City Council. The first formal reading will take place Aug. 13,  after Community Impact Newspaper’s print deadline. Looney said it is likely the plan will receive approval after the second reading Aug. 27. If that happens, the implementation process will begin, and the document will be updated every five years for fine-tuning.

Several elements from the plan  could be implemented right away, such  as amending the city’s zoning, platting, sign and parking ordinances; revisiting the extraterritorial jurisdiction policy; updating the regional thoroughfare plan; conducting a historic property survey; and looking at sub-area corridor plans.

A 2019 bond initiative is also in the works, and the comprehensive plan could help determine those projects.

According to Reaves, if the bond passes, it would help bring the goals outlined in the comprehensive plan to fruition faster.

“Whether the bond issue passes or not, the things that are in the comprehensive plan are still things that the community envisions that they want for the next 15 or 20 years,” Reaves said. “The bond issue is just one mechanism to bring about some of those things. ... It’s the sparkplug, but it’s not the sole source.”

Reaves said City Council would have to approve the bond initiative in February for it to be considered in a May election.

A complete plan draft can be viewed at  www.envisionnewbraunfels.org.

“It’s very readable,” Looney said. “We’ve had a lot of comments about its readability. It’s not loaded with a bunch of jargon.”
SHARE THIS STORY

The 17,000-square-foot facility ended up being about a $12 million investment.