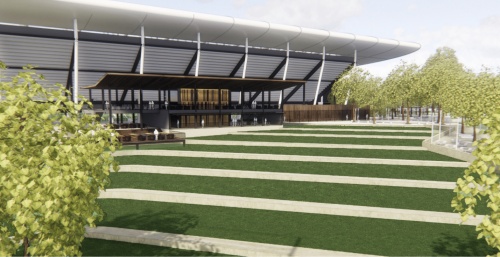 The proposal for a soccer stadium in North Austin includes parkland and a music venue.

Austin City Council appears be indicating interest to explore its options to develop the city-owned site at 10414 McKalla Place.

The North Austin site is being eyed by area developers for new mixed-use projects as well as by Precourt Sports Ventures, operator of the Columbus Crew soccer team, to build a new Major League Soccer stadium and relocate the Crew to Austin.

Council members had their first opportunity June 12 to discuss in public PSV’s official proposal for the stadium as well as city staffers’ June 1 report on the viability of the McKalla site for a stadium.

Item 60 on the June 28 agenda—sponsored by council members Leslie Pool, Alison Alter, Ora Houston and Ellen Troxclair—would direct City Manager Spencer Cronk to solicit plans to develop the McKalla Place site, including plans for professional sports stadiums as well as ones that would accomplish the following goals:

Pool and several area residents have indicated interest in issuing a formal request for proposals.

Item 64 on the June 28 agenda—sponsored by Mayor Steve Adler, Mayor Pro Tem Kathie Tovo and council members Sabino “Pio” Renteria and Delia Garza—proposes to have the city manager begin negotiations with PSV and analyze the group's official proposal and return to council Aug. 9 “for a status update on negotiations or for contract approval.”

A draft resolution includes a list of outcomes council would like to see in a deal, including:


For more information, view the agenda online.
SHARE THIS STORY