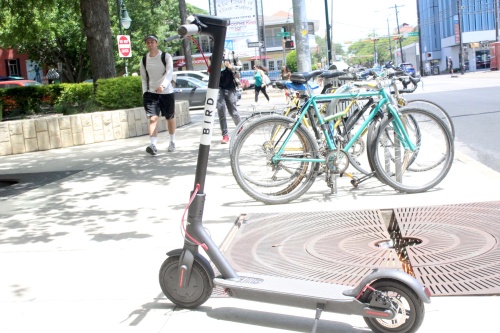 The Austin City Council had a plan in place to handle an influx of dockless bicycles and motorized scooters. On Feb. 1, the council authorized a pilot program through which city staff would speak with neighborhood residents about the new vehicles, and the transportation department would approve a few companies to operate a limited number of the devices.

On April 5, Bird brought dockless scooters in Austin without city approval. On April 16, LimeBike followed suit. Today, the scooters are tough to miss downtown. The crowd of students walking and biking through the University of Texas campus is interspersed with those riding down the sidewalk on a motorized scooter.

The scooters provide an easy method to travel short distances. Riders can locate the scooter using an app, take them to their destination, and leave them for the next customer.

On Monday, UT-Austin’s parking and transportation department tweeted a “gentle reminder” about the rules surrounding the scooters. According to university policy, they are only allowed where bicycle traffic is allowed, and they should be parked around bike racks, not in pedestrian pathways.

The quick rise in popularity of the dockless scooters and the two companies’ decision to bypass city rules disrupted the city’s anticipated timeline for the pilot program. The city will now look to enforce rules around the scooters that are already on the streets. The council will consider an ordinance amendment at its meeting this Thursday that would require companies to obtain permits to operate dockless scooters.

According to an April 16 memo from Transportation Director Robert Spillar, city staff is recommending a six-month term for dockless device permits, requiring a $30 permit for each device and a maximum of 500 vehicles per operator.

“The whole reason we’re here and we’re doing this is so everyone on the sidewalk and on the street is as safe as possible. That has caused us to move at a relatively expedient pace,” said Austin Transportation Director Jason JonMichael at a council work session on Tuesday.

During their discussion of the ordinance amendment, council members scolded the two companies which jumped into the market before the city could finish implementing its pilot program.

“Companies shouldn’t have a competitive advantage because they went forward and put their scooters on the street before they were permitted to do so,” said District 5 Council Member Ann Kitchen.

Mayor Pro Tem Kathie Tovo said she was “really disappointed” in the two companies that have started operations in Austin.

“I would implore those companies to consider how to bring your business into compliance with the process we’re doing now,” Tovo said.

Some council members raised concerns about the ordinance related to the expedited timeline.

Spillar said the language was chosen to be broad enough to include “other disruptive technologies” that may come in the future.

If the ordinance amendment is passed Thursday, it will become effective immediately.