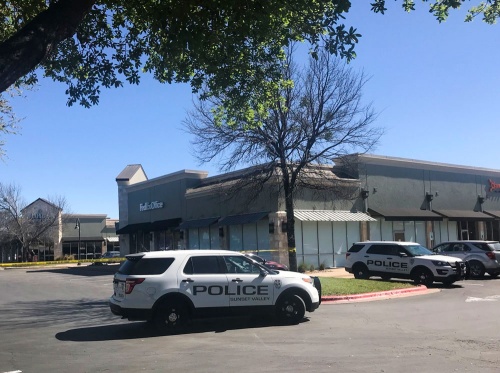 Surveillance video from the FedEx office on Brodie Lane, where Tuesday's package is suspected to have been shipped from, is credited for aiding officers in identifying Conditt.

For the latest news on Austin bombings, visit this page.

The package bomb that detonated in a FedEx Ground facility in Schertz and injured one person on Tuesday morning was intended to be delivered in Austin according to Austin’s Interim Chief of Police Brian Manley.

Tuesday’s early morning explosion on a conveyor belt of the facility northeast of San Antonio and 18 miles southeast of New Braunfels was the fifth bomb to detonate in Central Texas since March 2, and the first in the series of bombings to happen outside of Austin. Manley told Austin City Council members on Tuesday that authorities believe all five incidents are connected.

Manley said the nature of the explosive devices has evolved since the first incident on March 2.

The first three bombs—one on March 2, two on March 12—were hidden in packages and placed on specific residents’ doorsteps located on the east side of town. Those bombs killed two people and injured two others.

Manley said the fourth bomb that exploded on March 18 was placed on the side of the road and was detonated by a tripwire. Two men, 23 and 22 years old, received non life-threatening, but significant injuries. Manley said this incident “changed the complexity” of the situation and changed law enforcement’s messaging to the community.

The fifth explosion that injured a FedEx employee on Tuesday morning was hidden in a package but was intended to be delivered to Austin by the courier service. An Austin FedEx distribution facility at 4117 McKinney Falls Pkwy. and a FedEx Office store at 5601 Brodie Lane in Sunset Valley were closed by investigators early Tuesday morning.

Manley said it was apparent that this is an “evolving” and “complex” case.

“For us this is personal, this is home,” Manley said. However, he assured the council that the team of agents from the Federal Bureau of Investigations and the Bureau of Alcohol, Tobacco, Firearms and Explosives were just as driven as local law enforcement authorities.

Austin's police department has help from more than 500 federal agents, 50 Texas Department of Public Safety officers assigned to the city and several other agencies.

Manley emphasized the community’s duty to be vigilant and said it has never been more important to report anything suspicious.

“There is no tip too small,” Manley said. "We're going to solve this as a community."