Update: Family of Austin bombing suspect asks for prayers 'for the families of all who have lost loved ones' 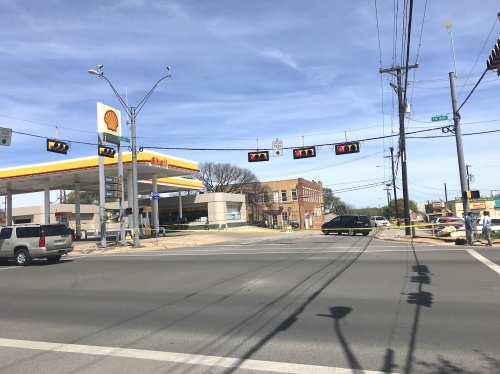 Law enforcement closed Railroad Avenue to traffic in downtown Pflugerville near the home of the Austin bombing suspect.

A statement was released from Eddie Harp on behalf of the Conditt family. It reads: "The family is grieved both for their loss and also for the loss of those affected by these heinous actions. The family’s present focus is on dealing with their shock and loss and cooperating with the police investigation. if you are a praying person please join us in praying for the families of all who have lost loved ones.”

Austin Community College has released additional information regarding Mark Conditt’s time spent at its ACC Northridge and Round Rock campuses.

The community college shared a link to a blog that Conditt wrote for a U.S. government class that he took in 2012. ACC additionally confirmed:

Explosive experts are working to safely remove and dispose of homemade explosives found inside a home located at 403 Second Street, Pflugerville, according to Community Impact Newspaper's media partner Fox 7 Austin.

In an abundance of caution, police evacuated residents within a four-block radius of the home from North Railroad Avenue to City Park Road and north of West Pecan Street. Pflugerville City Hall remains closed. The public is advised to stay away from the area as agencies work.

The FBI and ATF are working to mitigate any potential hazards to nearby residents.

The night before the death of the Austin bombing suspect, law enforcement officials filed an arrest warrant for Mark Conditt, 23, of Pflugerville.

“Hundreds of federal, state and local law enforcement officers worked together to identify and locate Conditt," Bash said in a statement from the U.S. Department of Justice. "I was awed by their professionalism, collaborative spirit, and indefatigable commitment to protecting the public. I send my deepest condolences to the families of Anthony Stephan House and Draylen Mason, and I pray for the recovery of the surviving victims of these monstrous crimes.”

The federal criminal complaint charged Conditt with one count of Unlawful Possession and Transfer of a Destructive Device. The complaint affidavit remains sealed because the investigation is still underway.

The department urges residents to stay alert and call 911 if they see any suspicious packages or bags because it is possible that further destructive devices were planted or mailed, residents of Austin and surrounding areas, according to the statement.

Investigators have also questioned the two roommates of Conditt, according to the Austin Police Department.

Investigators have detained two roommates of the Austin bombing suspect. One roommate was detained, questioned and released. The other is currently being questioned. Their names will not be released because they are not under arrest at this time. APD PIO

As investigators continue their search of a house in Pflugerville believed to have been the home of the Austin bombing suspect, Mark Conditt, more details of how the suspect created the bombs is surfacing.

Community Impact Newspaper's media partner, the Texas Tribune, reports Gov. Greg Abbott said materials used in the bombings were purchased at an area Home Depot. These included five signs that said something like "Children at Play."

"It is my information that that trip wire ... was tied to one of those signs that he purchased," Abbott said.

Abbott also relayed more details about how law enforcement came to connect Conditt to the bombings throughout Austin in March, according to the Tribune.

He said Wednesday that surveillance video was obtained at the FedEx store of Conditt mailing the packages. Investigators also had cell phone records indicating his phone was near each of the bombing sites and other key locations.

Meanwhile, law enforcement continue evacuating the area near downtown Pflugerville as a safety precaution, including closing Railroad Avenue to traffic.

The southbound frontage road and all main lanes of I-35 have reopened.

Traffic Update: All of Southbound IH-35 proper and frontage road have been reopened

Members of SWAT are still on the scene at a house in Pflugerville believed to be the home of the Austin bombing suspect, Mark Conditt.

State Troopers have secured the perimeter around the house on Second street in Pflugerville. A SWAT vehicle is on site, and officers can be heard breaking various items, including windows, at times over the last 30 minutes.

You can hear SWAT team smashing something at the house. Don’t know if you can hear it on the video or not pic.twitter.com/gSW2oGOx6F

The map below shows the locations of the five explosions in red as well as the location of where police attempted to apprehend the suspect before he died after detonating a bomb inside his vehicle. The blue icon shows the site of where law enforcement believe he lived in Pflugerville.

Austin police have completed investigating a report of a suspicious package found at an Austin-area FedEx center and have secured the scene.

Media Update: The scene is secure at 4117 McKinney Falls PKWY. Follow up investigation regarding suspicious package complete. Correction; there was a temporary evacuation of the building for precautionary measures, however, normal business operations will resume. APD PIO https://t.co/zVgbB6lowH

Media: Investigators are conducting a follow up regarding a suspicious package at 4117 McKinney Falls Pkwy. No evacuations. This is part of the ongoing investigation. APD PIO

A spokesperson from Austin Community College confirmed that Conditt attended classes from 2010-12. Per the ACC official, Conditt did not graduate and has not enrolled in any courses in the past six years.

Pflugerville Mayor Victor Gonzales said he has not received any further details on Mark Anthony Conditt but said he was told by law enforcement that he was a Pflugerville resident. More available on Community Impact Round Rock | Pflugerville | Hutto.

The suspected Austin bomber has been identified as Mark Anthony Conditt, according to Community Impact Newspaper's media partner Fox 7 Austin.

Southbound I-35 has reopened.

Southbound I-35 remains closed Wednesday morning to allow law enforcement to investigate the scene of the Austin bombing suspect who died after detonating a bomb as SWAT officers approached his car.

Because of these closures, Round Rock ISD warned the community that police activity near I-35 and Old Settlers Boulevard will be "drastically affecting traffic throughout the district."

"We anticipate bus delays and late arrivals due to heavy traffic. School will operate on a normal schedule but late arrivals will be excused," the district wrote in an email to the RRISD community.

The suspect believed to be responsible for five bombings in Central Texas died as a bomb was detonated inside his vehicle as SWAT officers approached the car.

Austin Interim Police Chief Brian Manley said the suspect was found in the parking lot of a Round Rock hotel.

According to Community Impact Newspaper media partner Fox 7 in Austin, the 24-year-old male suspect has not been identified pending notification of next-of-kin.

One officer suffered minor injuries when the bomb went off and the other officer fired a single shot. The officer who fired the shot has been placed on administrative leave as is protocol in these situations, Fox 7 reported.

Police stress that people should remain vigilant as they learn more about the suspect's whereabouts over the last 24 hours and investigate to see if the suspect had been working with any others.

Manley said the suspect is believed to be from the Pflugerville area.

“We don’t know where this suspect has spent his last 24 hours, and therefore we still need to remain vigilant to ensure that no other packages or devices have been left throughout the community,” he said.

The Round Rock Police Department also announced that southbound I-35 is closed from Old Settlers Boulevard to Sam Bass Road to allow law enforcement to investigate the scene in the 1700 block of N. I-35. The southbound frontage road lanes are also closed, and police are asking drivers to avoid the area.