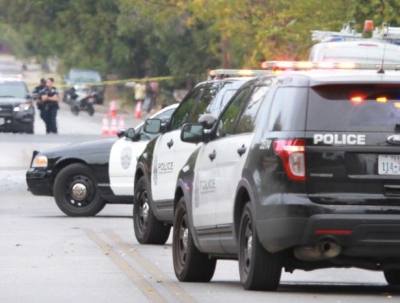 Sheriff Robert Chody appeared at commissioners court Tuesday morning to tell them about a potential partnership with Live PD, a television series that airs on A&E and follows police officers as they complete their daily tasks. Unlike Cops, the iconic real crime show centered on police, Live PD is aired nearly live, with some portions having only a 10-25 minute delays from the time they occur to when they appear on televisions in homes.

“Time and time again, we hear about transparency issues for law enforcement,” Chody said. “How much more transparent can we get than be willing to go on live TV? We’re demonstrating to Williamson County and the world that we have nothing to hide.”

According to the proposed contract, a camera crew would ride along with deputies, filming whatever happens to occur during that shift. During an episode, crews will ride with deputies in multiple locations, and Live PD will show different departments periodically, paired with pre-recorded footage, Chody said.

“It shows the general public what our deputies must deal with on a daily basis,” Chody said. “It puts a human face on law enforcement. We need this type of exposure in Williamson County.”

Every police department Chody has contacted have all reported experiencing a boost in recruitment from appearing on the television show, he said. Chody believes appearing on Live PD will allow the department to improve community relations.

“Williamson County is tough on crime, but sometimes it gets an unfair reputation,” Chody said. “[Some of the general public] thinks that we pull you over, give you a ticket and put you in the slammer with no due process, and that’s not the case. What a great opportunity for us to show, ‘Hey, we’re Williamson County and we do have due process, we do have transparency.’”

Williamson County Commissioners were not as enthusiastic about having police officers take part in a reality television show.

“Are we not really just showing the very worst part of Williamson County when we do this?” County Judge Dan Gattis asked. “Why do we want to show, kind of, our underbelly?”

Because of the delay, Live PD producers are able to cut out footage, censor people’s faces and make other edits before it airs. Commissioners expressed concern at the fact that while Live PD producers will accept recommendations from the sheriff’s department on what incidents to censor or pull from broadcast altogether, the show's producers have complete creative control per the proposed contract. However, Chody and County Attorney Doyle Hobbs, Jr. say that because the show is “pro-law enforcement,” they are not worried about what could potentially be aired.

In February, Tulsa Police Department ended their contract to appear on the show because they felt it misrepresented their officers, according to published reports.

“I commend the sheriff for being brave enough to step out there. I think it continues the direction this court has taken in being transparent,” Hobbs said. “This is the right move at the right time. I don’t see the down side to it. I think we have an obligation to do this with the atmosphere that’s out there in regardless to government [and] law enforcement.”

County commissioners decided not to take any action Tuesday morning, but indicated the issue would return to an agenda in the near future, probably next week.
SHARE THIS STORY