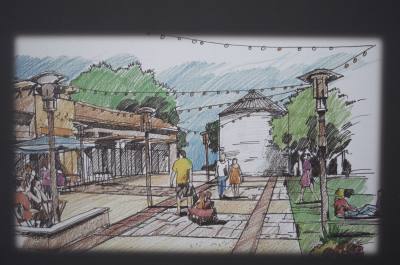 After the city of Hutto’s presentation to Williamson County last week on a $15.5 million proposal for a mixed-use development called the Co-Op District, commissioners Tuesday discussed how a partnership with the city to develop the proposal might function.

Commissioners took no action on the proposal Tuesday. A public hearing regarding the Co-Op District partnership is scheduled for 10 a.m. Dec. 19 at the Williamson County Courthouse.

Under the city's proposed plan, Hutto hopes to finance drainage system infrastructure improvements through a tax increment reinvestment zone, or TIRZ, that would help prevent flooding in the area, as well as make road improvements that would provide access to the proposed Co-Op mixed-use development and the surrounding community.

As part of the deal, Hutto city officials asked that the county to contribute half of the incremental tax increase they would receive over the 20-year term of the project to provide funds to allow a road and storm drainage system to be built. Hutto’s proposal also includes a request for Williamson County to sell an existing building at the development to the city in exchange for an appraised value price during a 24-month option period.

Precinct Four Commissioner Larry Madsen said Tuesday that, in the past, cities in partnerships with Williamson County have created their own TIRZ agreements, then have the county enter in with tax increment financing.

According to the Texas Comptroller’s Office, local governments use tax increment financing as a tool to publicly finance improvements to infrastructure and buildings within a designated area known as a reinvestment zone. The cost of improvements is repaid by the future tax revenues of each taxing unit that levies taxes against the property.

Precinct Three Commissioner Valerie Covey said that since the talks about the potential economic partnership with Hutto began last week, she has already heard of other projects planning to ask the Williamson County to participate in similar tax deals.

“Our discussion has been heard, and more are coming to ask us for tax payments,” Covey said. “We need to look at that [criteria] and make it square. We’ll be talking about it soon.”

The Hutto Co-Op District could be “a win-win situation" for everyone involved, Madsen said.

"We just want to make sure we have everything proper in place and understand the whole situation," he said. "We have property sitting there not [accumulating] any tax revenue. Through this project, we’d have revenue.”