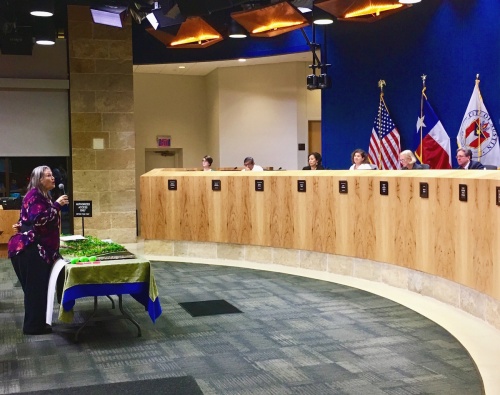 Northwest Austin resident Idee Kwak put on a dramatic performance in opposition of Austin Oaks that involved a to-scale diorama of 700 trees, roughly $6,000 in cash and broken eggs.

The controversial 1 million-square-foot PUD at the southwest corner of MoPac and Spicewood Springs will head to third reading where it will need a nine-vote supermajority–more than it received after the hotly debated­ second reading–due to a valid petition signed by 27 percent of surrounding property owners.

Council members Kathie Tovo (District 9), Alison Alter (District 10), Ora Houston (District 1) and Leslie Pool (District 7) were the no votes on a zoning ordinance that experienced its own metamorphosis through the almost six hours of emotional public comment, uncharacteristically testy dais debate and a tour through 26 different amendment sheets.

At the end of the debate, it was District 4 Council Member Greg Casar’s plan to double the amount of affordable housing on the site that prevailed, with Tovo’s requirement that 50 percent of affordable rental and ownership units be offered as two-bedroom units, and Pool’s 19,648 trip cap and tree preservation amendments tacked on.

The development as it stands, now includes 425 total residential units–up from 200, 46 of which will be offered as affordable, up from 20, with an additional 40,000 square feet of office space and the removal of a 90,000-square-foot hotel in exchange for an additional residential building on the site.

According to city staff, due to the increase of residential units, the parkland dedication component of the plan no longer proves "superior," a standard used in PUD zoning cases. Because PUD developments ask for entitlements beyond what the current zoning allows, certain aspects of the proposed development must provide a community benefit that is superior to what the city could accomplish under the current zoning.


“I am disappointed in my colleagues for moving forward without understanding the numbers and for being willing to accept less than is possible for our community and providing giveaways to the developer.”

Alter’s vocal push to require the developer to take on a greater responsibility of traffic mitigation–the central issue for residents in the area, according to the District 10 council member–failed, but the money to be received through two added office floors to one of the buildings along MoPac­ will be spent between traffic mitigation and affordable housing.

Alter said she felt her colleagues did not understand the deal they made and claimed they favored the developer’s desires over the community’s. Her qualm with the council’s decision-making Thursday night echoed her winning campaign platform last fall, in which she criticized former Council Member Sheri Gallo for siding with developers.

“I am disappointed in my colleagues for moving forward without understanding the numbers and for being willing to accept less than is possible for our community and providing giveaways to the developer,” Alter said right before the final vote. “That’s on you.”

“If this was purely about developer giveaways, that would be the easiest thing to vote against, but this provides jobs, it provides homes, it provides medical care, it’s a two-way street,” Garza said. “We can characterize this as a horrible thing our colleagues did, or we can respect our colleagues’ decision and really believe that they’re doing what they think is best for the city.”

Neighboring residents raised anxieties over increased traffic impact, the residential component’s added pressure on the area’s already overcrowded schools, and the harm the development would do to the tree population.

There was a dramatic performance by resident Idee Kwak, who produced a to-scale handmade diorama of the 700 trees in the Austin Oaks area, only to blast death metal music, rip the trees out of the diorama and throw them to floor in front of the dais, suggesting the proposed development would remove substantial oxygen from the area and suffocate the surrounding residents.

There was an emotional plea from Rain Minns and her three children, who begged council to not approve a project that would see the removal of trees her children enjoyed so much.

Then, there was the argument against increased traffic, which Alter said was the main fear from residents in her district.

“Imagine blood running down your arm, that’s the blood of children of Northwest Austin, of Northwest Hill, just trying to get to school,” said Kathleen Vermillion to City Council. “We ask that you do your job and vote against this PUD. We elect you to city council to protect the citizenry.”

Though the case passed on second reading, council voted against closing public comment due to the heavy changes that were made to the proposal. The public will have another chance to weigh in when council hears the case on third and final reading, the date of which is to be determined.