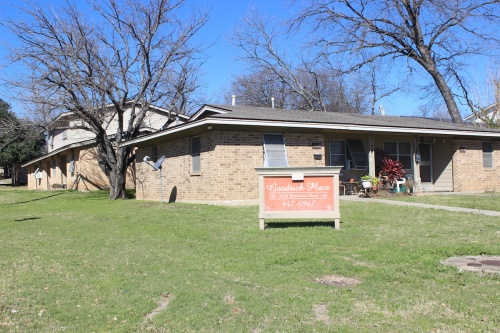 The Zilker neighborhood's Goodrich Place may get more affordable housing at 2126 Goodrich Ave.

But the 80 or so proposed new units won't be as affordable, according to Henry Flores, president of Madhouse Development Services Inc. Flores was contracted, along with Atlantic Pacfic Communities LLC, by the Housing Authority of the City of Austin to redevelop Goodrich Place into Pathways at Goodrich Place. The complex was built in the Zilker neighborhood in 1973.

The Housing Authority of the City of Austin, or HACA, provides affordable housing in Austin and owns several properties in the city.

Madhouse is proposing to raze the properties at Goodrich Place, rebuild the original 40 affordable housing units (that don't currently have Central Air) and add approximately 80 units, five percent of which will be reserved for those with special needs, including those struggling with alcohol or drug addictions, the chronically homeless, people with disabilities and veterans or wounded warriors.

The rent will remain the same at 30 percent of the average median family income for the 40 current affordable housing units which will be redeveloped.

The new units will be priced at 30, 50 and 60 percent of the average median household income if the developer is able to receive the housing authority tax credits from the U.S. Treasury Department, according to Ann Gass, director of strategic housing initiatives for HACA. Goodrich Place is one of 9 developments seeking Austin City Council support at its Feb. 9 meeting.

The highly competitive 9 percent Low Income Housing Tax Credit Program allows developers to offset a portion of their federal tax liability in exchange for creating affordable housing.The program offers investors a chance to buy tax credits to offset other taxes by investing in multi-family rental development projects in exchange for making a certain percentage of the homes affordable.

A letter that accompanies Goodrich Place's application for affordable housing tax credit from Dan Wilson, a representative of Pathways at Goodrich Place, said the property will also include units priced at market rate to "create a mixed-income community".

Goodrich Place is one of 18 affordable housing communities owned by the Housing Authority of Central Austin.[/caption]

HACA plans to relocate the current residents to some of its other properties and pay for their moving costs while Goodrich Place is under construction. Those relocated residents will be welcomed back to Pathways at Goodrich Place when construction ends and will be able to continue paying the same rent they were paying before the redevelopment.

Pilar Sanchez, vice president of housing and community development for HACA, said she expects Madhouse will receive the affordable housing tax credit in June or July, and construction will begin in early-to-mid 2018 and take 10-12 months to complete. The application indicated the last unit would be occupied by December 2019.

Sanchez said public input would be sought before design begins on the development. A HACA survey currently available to the public seeks input into the type of design residents prefer for Pathways at Goodrich Place. The survey closes Monday at 5 p.m.


This story has been updated to show HACA's correct name, the Housing Authority of the City of Austin.