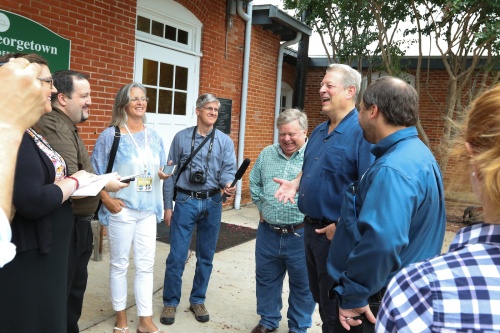 Gore was in Texas for the Climate Reality Corps Leadership Training in Texas, which teaches people about climate change and trains them to talk to others to enact change.

"I've been hearing about all the good things going [on] in Georgetown ... this is becoming a very well-known story here, and it's exciting for me because [the city is] just following the economics and, as your mayor says, the facts," Gore said. "It's led you to 100 percent renewable energy, which is fantastic. It's really very exciting."

The city of Georgetown announced a 150-megawatt solar power agreement in March 2015 that would, along with a 144-megawatt wind energy agreement from 2014, create one of the largest municipally-owned utilities in the U.S. to supply its customers with 100 percent renewable energy by 2017, according to city officials.

Gore tweeted about the announcement after the story garnered international attention:

Ross said Gore had been reading about the city's renewable energy initiative and he wanted to know more.

"It was an honor and a privilege for the former Vice President Al Gore to spend some time with us learning about our 100 percent renewable energy initiative. He was very impressed, and he wishes other cities and entities would join Georgetown in going 100 percent green for a variety of reasons—great economic development, low cost to the ratepayers," he said. "He was so gracious."

Gore said Georgetown was a trailblazer for other cities and utilities who may be looking at the economic benefits of renewable energy.

"Money is talking because the cheaper price for renewable electricity makes it easy to switch over [to renewable energy sources]. ... All over the world this same kind of thing is in the works, and in many places we are seeing a big, big switch over," he said. "As the mayor says, when the ratepayers get a break and you get an extra ability to recruit new jobs here, then the fact that there is a side benefit of ending up helping to save the world—that's a good side benefit."

He said when other cities approach switching to renewable energy as an economic decision in the same way Georgetown has, the country will see a "massive wave" or cities choosing renewables.

"One thing that Georgetown demonstrates to these other places that are just beginning to think about it, is that the power supply is not only more affordable, the cost is predictable for at least 25 years into the future and really beyond that," he said.

Gore said although climate change can be a difficult topic to talk about, recent weather-related disasters and the spread of diseases such as the Zika virus are a tipping point.

"I think we are right at a tipping point. The cost of the renewable energy is coming down, so money talks, but at the same time money is talking, Mother Nature is screaming," he said. "I think that the role of fact-based economic analysis really is the tipping point because there are a whole lot of people who don't want to think about the environmental consequences of global warming, much less talk about it, because it's painful to talk about and it has become politicized in a way it never should have."

Gore also spoke with Chris Foster, Georgetown manager of resource planning and integration, about the city's transition to renewable energy.