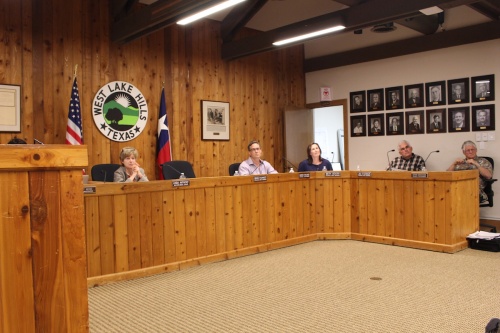 West Lake Hills City Council is asking citizens to share their thoughts on short-term rentals through a survey.

The two-question, online survey approved by City Council at its April 13 meeting will be placed on West Lake Hills’ website April 15. Mayor Linda Anthony will notify citizens of the survey through the city’s reverse 911 communication program.

Residents will have 10 days to submit answers, and the data will be compiled and presented to citizens in a town hall meeting to be scheduled for a date between April 28 and May 11, said City Council member Stan Graham. Graham, along with council members Brian Plunkett and Darin Walker, formed the subcommittee tasked with researching STRs in West Lake Hills and created the survey.

The survey asks citizens if they own and occupy the home listed and how they think STRs should be addressed in West Lake Hills. Citizens may choose from several preset answers with a comment box as a final option.

“This is all we’re really looking for,” Graham said. “We’re just trying to get a lot more residents to chime in on short-term rentals.”

The first attempt at a survey, which was presented at the March 23 City Council meeting, was met with criticism from citizens who said the survey focused largely on ways the city could regulate STRs.

“We probably made it a little more complicated than it should have been, in that we asked a lot of questions about the regulations we were considering, “ Graham said April 13.

Resident Scott Griffin, who attended the March 23 meeting and saw the original survey draft, said April 13 he was “a bit surprised by the switch in the survey” from five pages to one page with only two questions.

“I’m not sure what the council is going to learn from this survey,” he said. “I don’t believe the [citizen] response is going to be overwhelmingly, ‘get rid of [STRs].’”

He said the question on how residents think STRs should be addressed will “not provide a lot of granularity.”

“General rule cities like West Lake Hills are limited in what they can regulate in areas like short-term rentals,” he said. “You might want to get an opinion from the Attorney General’s office as to whether or not you can regulate this activity.”

Anthony gave the survey her stamp of approval, calling it “simple” and “easily answerable.”

“We just want to start somewhere,” she said. “I think this [survey] is a good way to do it.”

Correction: This article has been edited to reflect that Brian Plunkett and Darin Walker are on the STR committee with Stan Graham.