Light at Kohler's Crossing and FM 1626 in Kyle turns on 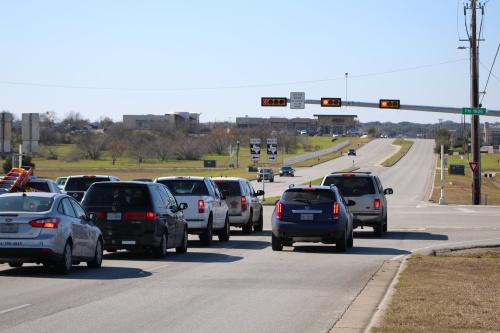 A traffic light at Kohler's Crossing and FM 1626 in Kyle, an intersection that previously had a four-way stop sign, became operational on Jan. 21.

A traffic light at a Kyle intersection, which has been a source of concern among city leaders and residents, was operational as of Jan. 21, a Texas Department of Transportation official said.

Kyle City Council had in July given city staff direction to draw up a resolution in support of a roundabout at the intersection of Kohler's Crossing and FM 1626, which is near the Hays Performing Arts Center and Austin Community College Hays. But a resolution never came before the council. Previously, traffic control at the intersection involved a four-way stop sign.

On Sept. 1 the city of Kyle was informed that TxDOT had decided to move forward with the installation of a traffic light.

“As discussed earlier TxDOT will proceed with issuance of [a] work order to install a signal at [the] subject intersection,” said Victor Vargas, TxDOT engineer for the South Travis County area, in a Sept. 1 email to City Manager Scott Sellers. “This does not remove the possibility of round a bout [sic] at [the] intersection in the future. TxDOT will continue to work with the city of Kyle as the community grows and the needs change.”

Although a roundabout would have been more expensive to install, roundabouts generally require less maintenance, Assistant City Manager James Earp said. The city would have to pay to maintain the Kohler's Crossing-FM 1626 stoplight should its population exceed 50,000.