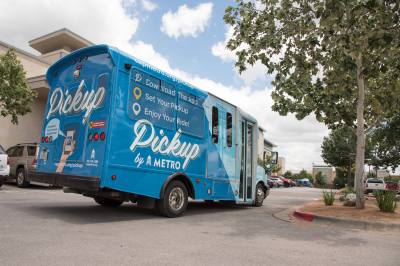 Pickup, a new on-demand service from Capital Metro, will debut by early fall. This photo shows a vehicle from a previous iteration of the Pickup program that ran in the Mueller area.

Pickup customers will be able to request rides directly using a phone app. The cost per trip will be $1.25, the same as a single bus ride.

Similar to other ride-hailing services, Pickup will pick up customers where they are and drop them off at their chosen destination. Rides may involve other customers.

The four pick-up service zones include:


In the meantime, Capital Metro is seeking public input from area neighborhood associations and residents to help determine the service's hours of operations and zone names.
SHARE THIS STORY

Survey work continues along US 183 in Northwest Austin

District staff anticipate the deficit being covered with savings from staff turnover and unfilled positions.