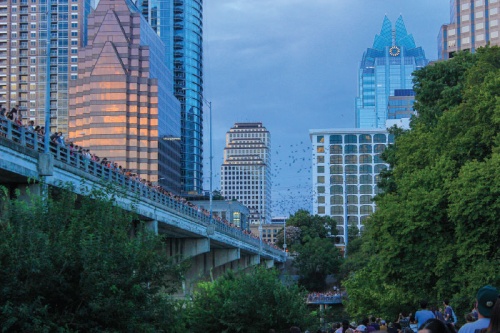 A view of the local bat colony emerging from the Congress Avenue Bridge at dusk, taken the evening after Bat Fest, an annual event that was held on Aug. 18.

Austinites driving across the Congress Avenue bridge may not know that as many as 1.5 million Brazilian free-tailed bats are cozied into the crevices beneath them.

But Merlin Tuttle, a bat conservationist with nearly 60 years of experience, has devoted his career to protecting these part-time Austin residents.

Born in Hawaii and raised in Tennessee, Tuttle became interested in bats when he was in high school and living near a bat cave.

“By the time I was 2 years old, I was raising caterpillars and doing all kinds of nature-type curiosity things,” he said.

In 1982, Tuttle founded Bat Conservation International. Four years later, he and the organization moved to Austin.

Around the same time, bats began living in the recently reconstructed Congress Avenue bridge, which, unbeknownst to its architects, provides an ideal habitat for rearing bat young.

“[B]ats were in those days, in the early 1980s, exceedingly unpopular,” Tuttle said. “Nearly everybody believed that they were mostly rabid and would attack you.”

Correcting these myths has been the cornerstone of Tuttle’s career.

“I’m very devoted not just to conserving bats”—who are threatened by fungal infections, wind turbines, habitat loss, pesticides and fearful humans— “but to helping people by showing how learning to learn harmoniously with bats can be a huge advantage,” he said.

Bat bites are exceedingly rare in Austin. Meanwhile, the colony that lives beneath the Congress Avenue Bridge eats as many as six tons of insects each night, mostly agricultural and yard pests. In doing so, the bats reduce the need for toxic—and costly—pesticides.

His next endeavor is to encourage city stakeholders to improve the Congress Avenue Bridge habitat, reducing overgrown vegetation that eclipses the bats’ path out to feed and excessive noise, such as from bands and fireworks, that can deafen bats.

“The bats have more options [than just the Congress Avenue bridge], and we better start treating them better if we want them to keep coming to our option,” Tuttle said.

For more information, check out www.merlintuttle.org.
SHARE THIS STORY