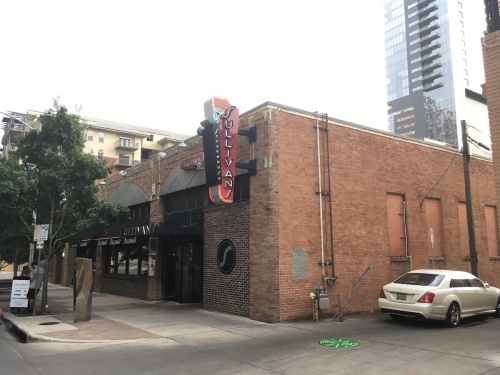 A 315-unit luxury apartment skyscraper is proposed to take the place of Sullivan's Steakhouse at 300 Colorado St., in downtown Austin. The project's plans were approved by the Design Commission on July 24.

A 44-story, 315-unit luxury apartment skyscraper moved one step closer to taking the place of the one-story Sullivan’s Steakhouse at 300 Colorado St., Austin, after the city’s Design Commission approved the plans on Monday night.

If approved, the 518-foot glass and steel skyscraper proposed for the heart of the city skyline would be the fourth-tallest building in the city by the time it’s complete—just surpassing the Frost Bank Tower, which stands at 515 feet. The 518-foot, 315-unit luxury apartment skyscraper is proposed for 300 Colorado St. If built, it would be the fourth tallest building in Austin's downtown skyline.[/caption]

The proposal now heads to the Historic Landmark Commission as the developer, Austin 3C Venture LP, has requested a demolition permit for the more-than-80-year-old, one-story, brick facade building that sits on the southern end of downtown's Warehouse District.

Although the plans passed 8-1, commissioners voiced concern over the historic significance of the site. Though they said the Warehouse District is not an official historic district, commissioners said it is one recognized by longtime residents. Rather than demolish the structure—out of which Sullivan’s Steakhouse still operates—commissioners expressed a desire to maintain its character on at least the ground floor, which is planned to operate as a commercial space.

The luxury apartment building would be the 12th project to emerge through the downtown density bonus program. However, onsite community benefits offered by the projects—as intended by the program—have been rare. Instead, developers have consistently taken the route of paying a fee-in-lieu, a trend which provoked criticism of the program by commissioners. In this case, the offer is $2.8 million to the city’s affordable housing trust fund for an increase in floor-to-area ratio from 8:1 to 25:1.

According to Michael Whellan, a representative for the developer, this would give the project 429,327 square feet of air-conditioned space—basically, more floors for apartments without counting the built-in 360-space parking garage—an increase of 287,541 square-feet over what is currently allowed on the tract.

“This might be the [densest] building you have downtown,” Whellan said. “It’s pretty remarkable, and I think it’s exactly what the program was meant to promote.”

Whellan said choosing the fee in lieu for this project was a matter of timeliness. At a time when the city is suffering from affordability and housing crises, Whellan said he felt the community would benefit more from $2.8 million in the affordable housing trust fund than installing art outside the building or attempting to use that money to buy down housing in the new building. Buying down units on a new downtown project could cost at least $250,000 per unit, Whellan said. He explained that $2.8 million would go further in buying down housing in an older project or one away from downtown, where that money could be leveraged for more than a handful of units.