ARCH homeless shelter up for new contract in 2018 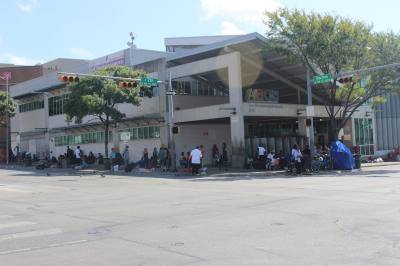 The final community forum to gather input and ideas about services provided at the ARCH will be held Feb. 5.

The Austin Resource Center for the Homeless, a city-owned downtown shelter, is up for a new contract Sept. 30. The Austin Public Health Department is responsible for the bidding of the three-year contract and, since December, has hosted a series of public input meetings about how the ARCH can better serve Austin residents.

The 2017 operating budget for Front Steps was $4.7 million. According to its most recently available tax returns, the organization received $2.3 million from the city of Austin in 2016 to operate the ARCH. Front Steps will reapply for the contract.

With this new contract, the city hopes to rethink the purpose and limitations of the ARCH. It also allows for new information and resources to be considered in the bidding process.

Based on the most recent count, in January 2017, ECHO found that more than 176 individuals were experiencing homelessness in the quarter-mile radius around the ARCH.

Additionally, on May 5, the City Council voted to accept a $1.25 million grant from Bloomberg Philanthropies, which will go toward ending homelessness in Austin.

The shelter opened in 2004. The three-story, 8,000-square-foot building has a capacity of 100 beds but has expanded to include 90 mats in recent years.

The ARCH serves as an overnight shelter for single adult men, a daytime sleep center for men and women and a daytime resource center to connect individuals experiencing homelessness to case management, mental health and substance use disorder treatment and other services.

It also serves as a cold weather shelter, coordinating with the city's Emergency Management Department and other area shelters to provide beds for anyone experiencing homelessness when the weather dips below 35 degrees.

The ARCH shares space with co-located agencies, including Veterans Affairs and the CommUnity Care Clinic. These are not included in the city contract.

"Everything in the building is up for redesign," an Austin Public Health employee said at the most recent public input meeting Jan. 19 at City Hall.

Feedback was solicited across a variety of topics, including what services should be available at the ARCH, whether its capacity should be limited to 100 beds and other shelters should be opened elsewhere to accommodate increased demand, and how its downtown location should inform its work.

Many mentioned the need for expanded services, including mental health care and job training, and more affordable housing, an issue that extends beyond the city's homeless population.

"Looking at designing services for the future that really meet the demand is crucial," Downtown Austin Alliance President and CEO Dewitt Peart said. "It's evident that the facility is undersized."

The ARCH is a single resource center being asked to resolve a city and regional issue, Peart said. As a result, it is "spilling out into the streets."

The contract bidding process is expected to begin this spring.
SHARE THIS STORY