The historic Palm School building is one of several landmarks and cultural sites located within Austin's central Palm District. (Courtesy city of Austin)

After more than a year of preplanning and community outreach, Austin's Palm District Planning Initiative entered into its first full stage of public participation this spring as the city seeks to finalize a blueprint covering transportation, business, development and culture along the eastern quarter of downtown.

Stretching from Lady Bird Lake to 15th Street west of I-35, the Palm District is home to several historic sites, modern institutions and planning subdistricts based around Rainey and Red River streets and the Dell Seton Medical Center. The hub of downtown activity has also been included in a range of city planning over the past decade-plus, such as the Waller Creek Master Plan and Downtown Austin Plan, and beginning in 2019 was targeted for its own civic review process expected to result in the creation of a new Palm District Small Area Plan.

“The fundamental goal of the Palm District Planning Initiative is to engage stakeholders and the public to develop a shared vision for an area of downtown that has a rich history and that we know is evolving quickly," said Stevie Greathouse, the initiative's manager with the Housing and Planning Department. "We’re really hoping that this planning process will help to unify the various visions that have come out over the years behind us and come up with a unified vision that can truly figure out what this place wants to be moving forward into the future.”

During a May 24 design commission briefing on the planning program, Greathouse said the initiative is aimed at highlighting the area's cultural roots in addition to the present-day rise of new development and entertainment there. The district has long been home to a portion of Austin's Mexican-American community, and the landmark Palm School located off I-35 served as a primary school for Latino students in the wake of the city's late 1920s segregationist plan.

While the area's new blueprint will not reverse that planning outcome or the further severing of downtown and East Austin neighborhoods established through I-35's construction later in the 20th century, Greathouse said the city is taking those historic considerations into account through its ongoing Palm District initiative.

"Over the years the district has seen waves of settlement and displacement that have been reinforced by public decision making, and it’s important that we approach the planning process with an understanding of this history," she said.

Since the Palm School closed to students in the 1970s it has housed Travis County offices and has recently become the center of a disagreement between city and county over its future use. The Palm District's Latino heritage is also being incorporated into Austin's new planning initiative through the recognition of existing sites, including the Emma S. Barrientos Mexican American Cultural Center west of Rainey Street and the creation of new markers such as a proposed Mexican-American Heritage Corridor running along Fifth Street. If designated, that cultural district could stretch between Guadalupe and Comal streets as a link between the disconnected sides of I-35. 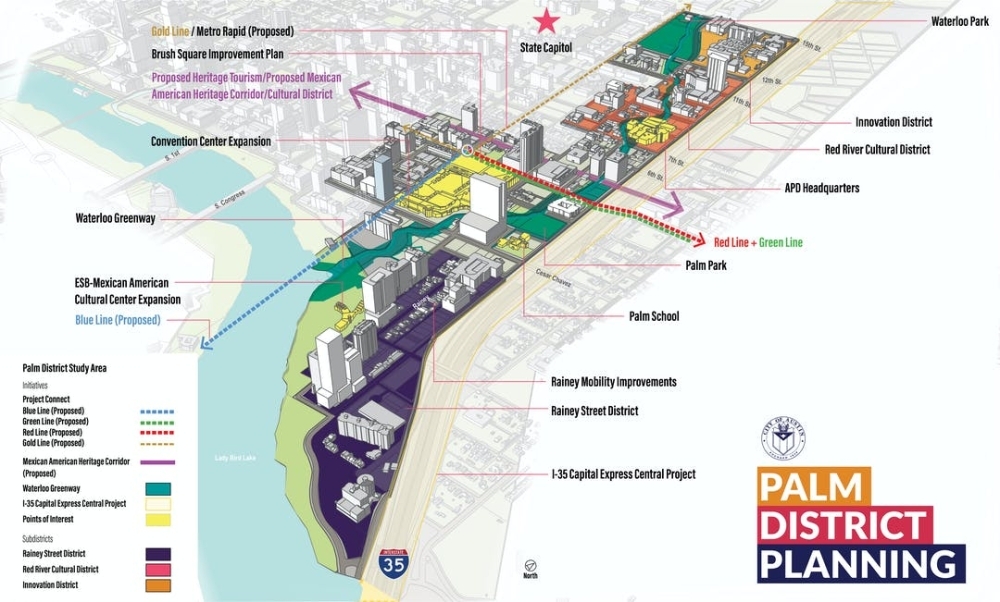 Greathouse also said I-35's impending reconstruction will play into the Palm District's future alongside other coming transportation considerations, including the arrival of Project Connect and its four separate rail line connections planned to be centered there. While the shorter-term district initiative is unlikely to affect the state-led design of Austin's central artery, she said some city staff's work on both the Palm District and I-35 could result in shared planning on aspects of the highway redesign such as a possible cap-and-stitch between west and east sides.

The Palm District Planning Initiative recently entered its "visioning phase," which Greathouse said will be more focused on community engagement than the pre-planning that ran through last winter. Online resident feedback options opened in early May through the SpeakUp Austin portal and a project email box, and Austin is set to host its first two virtual public input sessions on the district plan in mid-June.

Additional and review phases are scheduled through early 2022 with the end goal of creating a distinct small area plan and amendments to the existing Downtown Austin Plan. With the end goal of setting a new community-driven vision for the area, Greathouse said a finalized district plan could be presented to the city planning commission and City Council by spring of next year.

"We will evaluate whether our planning effort is successful based on the extent to which it achieves community benefits in an equitable manner," she said.