Teachers, staff rally for 10% raises ahead of Austin ISD board meeting 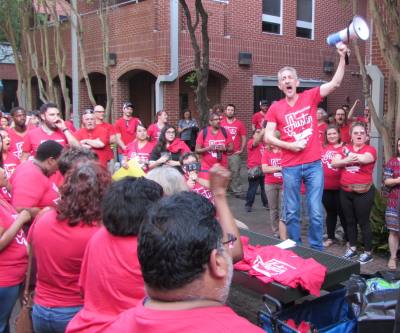 Austin ISD and Education Austin—the AISD teachers’ and employees’ union—continue to clash over proposed salary raises for the 2019-20 fiscal year. Over 125 AISD staff members rallied at the district’s headquarters downtown May 20, demanding 10% raises for all district staff.

Education Austin President Ken Zarifis led the crowd of teachers, bus drivers, librarians and contracted staff in chants of “we are worth it” and “words don’t pay the rent” ahead of the board of trustees’ meeting.

“We know that you deserve 10%. When the district gets tens of millions of dollars who needs to see it first?” He asked to a response of, “We do!”

On May 14, Education Austin held a news conference and rally announcing its demands for a 10% pay increase for all AISD employees due to possible legislative actions that could bring new funds to the district. The press conference was held just over a week after AISD reported at a board workshop May 6 that negotiations with the union were continuing, and the district was considering raises of 1%-2%.

“In the past, Austin ISD has been able to say, 'We can’t give pay raises because the Legislature has us hogtied,'” Zarifis said May 20. “Now that day is over with. That excuse is no longer there. Yet they say they can only do 1% for teachers only.”

According to district documents from the May 6 meeting, a 1% raise for district staff across the board would cost the district about $5.79 million for the 2019-20 budget, while a 5% raise would cost about $28.95 million.

While school funding is still being discussed by the 86th Texas Legislature, including the possibility for $5,000 raises to teachers across the state, the district is evaluating its future budget as if no funding changes will occur at the state level, according to the May 6 meeting. AISD trustees will be presented a final budget for approval in June.

Education Austin continued to rally outside of the district board room after the May 20 board meeting had begun. As some rallied outside, others participated in public comment at the meeting.

“Now when the state [legislature] is poised to line our pockets with millions, why do you refuse us?” teacher Kent Coupe asked trustees at the meeting.

Teresa Razo, a bilingual teacher, said she drives Lift during her off time to afford to live in the district and asked the district to give the 10% raise.

“If AISD wants to retain its employees pay us what we’re worth,” she said. “Good employees are leaving the district in the hundreds. I don’t want to be one of them, but the high cost of living… I can no longer afford it.”