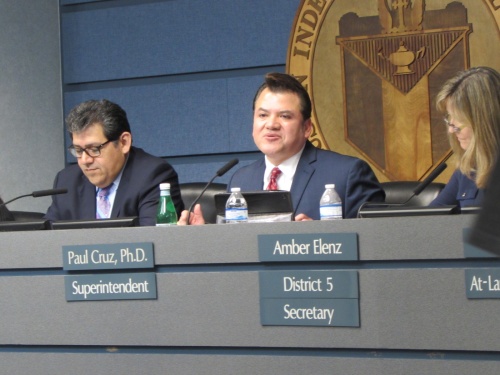 Austin ISD trustees approved a theoretical percentage cap on the number of Title 1, or socioeconomically disadvantaged, students that will be directly impacted by the district's coming school closures and consolidation decisions.

The percentage cap was tacked onto a document of "guiding principles" May 20 that district staff will use when creating scenarios to close and consolidate schools, change school boundaries and to better use district resources. The amendment to the document passed 5-4, with trustees Ann Teich, Jayme Mathias, LaTisha Anderson, Arati Singh and Cindy Anderson voting for the amendment.

The amendment to the guiding principles came after multiple failed attempts by Teich and Mathias to have the document outline in more detail the district's plan to close schools in an equitable way when it comes to Title 1 families. Those amendments failed in 4-5 votes. Cindy Anderson had voted against the previous amendments during the course of the meeting before approving the percentage cap.

"I want to publicly thank Vice President [Cindy] Anderson for helping us to avert a catastrophe this evening," Mathias said. "We were heading to a 5-4 split on a vote of this, the guiding principles, with some trustees feeling that equity is not a value to this board. So glad that in the end we are able to at least come up with some language that's a bit of a compromise for us."

Trustees who voted against the motion felt the cap could hinder the districts ability to consolidate schools. Also, other language in the document already outlined some goals when addressing socioeconomically disadvantaged students, and trustees were hesitant to amend the documents so late in the process.

"This isn't me wanting to keep an unnecessary burden on [Title 1 schools], this is an unfortunate reality of our district right now when we look at where families are going," said District 7 trustee Yasmin Wagner, who voted against the amendments. "We have more schools than we can support right now financially. Something's gotta give. How do we realize that in a way that doesn't impact [Title1 students]?"

LaTisha Anderson, whose District 1 represents much of East Austin, called voting down earlier amendments to included additional protections for socioeconomically disadvantaged students "a slap in the face" to people in her district.

Trustees ultimately approved the guiding principles document after the amendment in an 8-0-1 vote, giving district staff direction on how to proceed with the school change process. Austin ISD staff will present suggestions in August to consolidate schools and change boundaries to better use district resources.

Decreasing enrollment and required recapture payments caused an AISD budget shortfall in fiscal year 2018-19, and another shortfall will occur in FY 2019-20 if state lawmakers do not pass school finance reform this legislative session. School consolidations and boundary changes could help the district save money and create right-sized campuses across the district.

Made up of 22 bullets and broken down into five main categories, the guiding principles outline school change goals that: