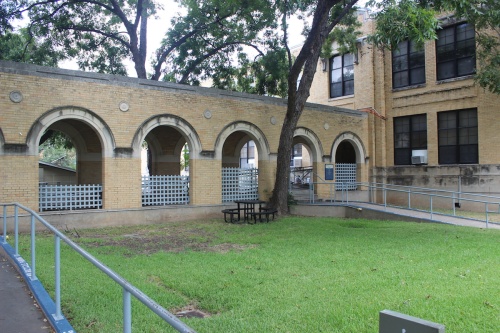 The building at 1212 Rio Grande St. was the site of Austin High School for 50 years before it became an Austin Community College campus. Now, ACC is renovating the inside while preserving its historic structure.

Scott Sayers remembers his first year at the former downtown Austin High School campus like it was yesterday.

Carrying an armful of textbooks down the set of stairs that led to the cafeteria, he missed the last step, tumbling to the ground as his textbooks scattered—to his horror, right in front of a group of senior football players.

“Freshman,” he recalled the seniors muttering.

Nearly 50 years later, Sayers laughed at the thought of recreating his embarrassing moment as he takes a tour of his alma mater, days before Austin Community College is set to break ground on renovations for what is now the college’s Rio Grande campus at 1212 Rio Grande St., Austin.

Sayers’ locker, No. 222, is one of the few that remain at the transformed AHS, which was taken over by ACC in 1975, five years after Sayers, his wife, Julie, and his friend Lindy Segall graduated.

Most of the hallways are now stripped of lockers, and what was once the cafeteria and auditorium have become classrooms for the approximately 5,000-6,000 students seeking associate degrees and workforce certificates at the college system’s downtown campus.

On Thursday, ACC broke ground on a $49 million renovation project to update the facilities and bring new state-of-the-art classrooms to the historic building. “That old building is beautiful,” Sayers said. “It’s just a beautiful old building, and if you’re wanting to preserve something that speaks to the history of the city, boy you’ve got to preserve that look.”


Scope of the project

By late 2019, the ACC Rio Grande campus will have the following:


During the renovations, classes for programs such as the American Sign Language-Interpreter Training, human services and paralegal will continue in Building 3000 across the street from the main building, along with core curriculum courses. Other programs historically offered at the Rio Grade campus will move to other campuses during renovations.

ACC project officials insist the building’s history and architectural features, such as its gothic façade and outdoor walkway, will be preserved.

Sayers said it brings him comfort to know the original building has not been razed to make room for a high-rise commercial development building. The 3.47 acres of land, according to the Travis County Appraisal District, is currently valued at $15.1 million.

“We want to preserve part of it, whatever we can,” Sayers said. “More power to ACC if they can respect the history and continue to use those buildings."

"[The Rio Grande campus] is an important part of the Austin Community College community and to Austin," ACC President and CEO Richard Rhodes said Thursday at the groundbreaking. "We're bringing this campus into the new century."

Rhodes said the exterior of the building will remain untouched.

"What you see outside is what you will see 100 years from now," he said.

U.S. Rep. Lloyd Doggett, D-Austin, who graduated from AHS in 1964, said he grew up a block-and-a-half from the campus and and was pleased the history of his alma mater would be preserved.

"I doubt that there is a room in this building or this annex that I haven't had a debate in," he said with a laugh.

Instead of breaking ground physically, Lloyd joined ACC officials and students as well as AISD officials in ringing school bells, typically used to signify the start and end of a school day.

Before AHS settled at the Rio Grande campus, it had several homes throughout the city. Over the next 50 years, both Austin ISD and the city of Austin’s population would grow, bringing six additional high schools to the city.

The Maroon newspaper was founded in 1928, and in 1953, AHS was renamed Stephen F. Austin High School after the city’s founding father.

“Alumni and students persist today in referring to ‘Austin High,’ and ties to the name are strong,” wrote historian Brian Shenk in the AHS 100-year anniversary yearbook.

In the fall of 1969—Sayers’ and Segall’s senior year—AHS had a little more than 1,500 students enrolled under the direction of principal W.R. Robbins, according to the class of 1970 yearbook, The Comet. The city of Austin's population was 244,074 with an annual growth rate of 4.1 percent. Scott Sayers, now an agent for professional golfer Ben Crenshaw, holds up a photo of the Austin High School class of 1970.[/caption]

Sophomores at AHS were reading "The Taming of the Shrew." More boys than ever before enrolled in home economics. “Kiss Me Kate” was the theatre department’s spring musical. The Austin Maroon football team won the 1969 district championship. The Austin ISD school board traveled to Washington, D.C., to discuss desegregation plans with health, education and welfare department officials.

By then, Segall and Sayers said they started to notice some of the problems in the school. A cramped library, overcrowding and lack of air conditioning were some of the issues cited in the old building. Throughout the neighborhood, businesses were starting to move into old homes, and parking was becoming limited.

"Things were starting to encroach,” Segall said. “It was becoming a more popular area for commercial development, even back then, so we were losing that neighborhood campus feel.”


“I never felt that we were lacking for anything. It will always be part of my history.”

On Sept. 27, 1969, Austin voters approved $74 million bond for a new AHS, to be located on waterfront land sold to AISD by The University of Texas.

By 1975—Segall and Sayers' five-year class reunion—AHS had moved into the building that sits at 1715 W. Cesar Chavez St., Austin, and ACC moved into the Rio Grande campus.

Segall and Sayers said they are pleased the building remained in the field of education and in the hands of an institution such as ACC, but it will always be their Austin High School.

“We were just blessed to have a beautiful, historic building and though it had its deficiencies, clearly, because it was an old building, we respected it and knew we had something special," Segall said. “I never felt that we were lacking for anything. It will always be part of my history."