Irene's: All nostalgia, no pretension 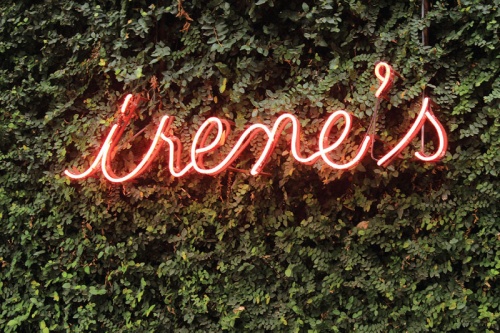 On either side of Irene’s bar customers can find the inspiration behind the downtown restaurant. In a framed photo behind the bar near the entrance a woman wears sunglasses, a cigarette dangling out of her mouth. This is ELM Restaurant Group partner Chad Gluckson’s grandmother Irene–a woman who drank, smoked, watched “Wheel of Fortune” every night and understood how to make guests welcome in her home.

Once customers walk down to the end of the bar they will find a record player, a vinyl collection that ranges from Otis Redding to Jason Isbell, and a piano in the corner of the room in front of the patio entrance lined with votive candles—objects more likely to be found in a living room than a bar—and indications of the laid-back, homey vibe Irene’s is seeking to create.

“Each one of my restaurants is built on an emotion. [Irene’s] is nostalgia. It’s food that’s fun, that’s delicious. That’s kind of old school,” ELM Executive Chef Andrew Curren said.

Irene’s is one of five restaurants the group operates in Austin, along with 24 Diner, Italic, Fareground and Cookbook Café. Three of those locations have started up within the last two years, including Irene’s, which opened in spring 2016. Curren said each restaurant’s concept had to offer something unique to the city’s scene, and Irene’s could do that by focusing on comfort.

The Goodnight Irene cocktail, inspired by Gluckson’s grandmother’s signature drink, is two parts vodka, a splash of lime and “cranberry for color.” The strawberry cake is the recipe Curren’s mom would make on his birthday, reimagined by Curren’s wife, ELM pastry chef Mary Catherine Curren. There is popcorn on the menu for $2 alongside dishes such as pimento cheese with saltines.

The menu is designed with both quality and accessibility in mind. Andrew, who has traveled to Italy, Vietnam, Mexico and Costa Rica during his career, said he learned the food culture in those countries by finding the places locals frequent. He looked to recreate that vibe at Irene’s—which he calls “the fanciest dive bar in town.”