South Austin strip mall could transform to high-rise towers and green space, but years of negotiations lie ahead

The Brodie Oaks shopping center at the convergence of three major South Austin roadways is a reminder of a time when strip malls with ample parking were in vogue. It opened in 1982, and in the years since, malls of its time have increasingly fallen out of favor among city planners, local leaders and residents.

Today, many of the store names on the facades have changed. Original tenant Mervyn’s gave way to Hobby Lobby, and some of the spaces are vacant, including the former Toys R Us and Neiman Marcus Last Call locations. However, as businesses have moved in and out, the layout has remained the same.

Barshop & Oles, along with a team of architects, planners, lawyers and experts, announced Dec. 3 it wants to replace the 38-acre site of big box stores and asphalt lots with 3 million square feet of retail, office and residential space.

The plans include 13.7 acres of green space, 1,600 new residential units, 1.1 million square feet of offices, 450 hotel rooms and 140,000 square feet of restaurant and retail space. Pending approval, as the project is phased in over the next decade, the developer said the estimated budget could be over $1 billion.
RELATED STORIES

• The beginning of the end: Vaccines arrive in Austin hospitals, clinics and pharmacies thanks in part to research developed at University of Texas

Before the project begins, it will have to go through an extended negotiation with city planners, city council members and neighborhood residents called a planned unit development, or PUD. That process will extend through 2022 and likely into 2023, according to developers.

Landscape architect Rebecca Leonard, who is leading the land planning aspect of the project, said about 84% of the site as it exists today is impervious cover—either parking lots or buildings that do not absorb rainfall.

The new plans will reduce the impervious cover to 54% on the new site and will include a retention irrigation pond on site to avoid runoff into Barton Creek, located just behind the mall.

The tradeoff for a more environmentally friendly project that aligns more with what the community wants, Burdette said, is the developers will have to build up. Initial plans call for structures as high as 275 feet, or just about 30 feet shorter than the University of Texas tower.

“We trade density in height in exchange for water quality and more green space,” Burdette said.

Upon early review, that tradeoff does not add up for Peter Hess, chair of the development committee of the Barton Hills Neighborhood Association. Hess said his association has not yet taken a formal stance on the project because it is still gathering details. But from his perspective, although he said there is a lot to like about the project, the benefits are not worth increasing height restrictions from 60 feet under current zoning to 275 feet as planned.

“The tradeoff they’re proposing is completely disproportionate,” Hess said. “There is not enough in this package to make it this dense.”

The team behind the project recognized the temptation to compare Brodie Oaks to another high-profile mixed-use development on the northside of Austin.

“We love The Domain but we want it to be different from The Domain,” Burdette said.

Leonard, who is also involved with the Broadmoor mixed-use redevelopment on the IBM property next to The Domain, said there are some important differences. The Broadmoor project is about 65 acres—nearly double the size of the Brodie Oaks project—and The Domain encompasses more than 300 acres.

“There is no greenbelt like that adjacent to The Domain or Broadmoor,” she said. “The greenbelt is the DNA of Southwest Austin.”

The Southwest Austin region is not known for modern development projects, but if approved by City Council, the Brodie Oaks redevelopment would join a growing list in the area.

Stratus Properties CEO Beau Armstrong, who oversaw the development of Lantana Place on Southwest Parkway, said as residential communities have expanded south and west towards Dripping Springs, the demand for retail, offices and services in the region has increased.

“I think that a mixed-use [project] that incorporates some living, hospitality, a little bit of retail and offices [like at Brodie Oaks] just kind of makes sense for the area,” he said.

However, Brodie Oaks will face the same environmental challenges as other projects in the area that are built atop the Edwards Aquifer or along greenbelts, according to developers who worked on similar projects. Ongoing projects such as Lantana Place, Garza Ranch and Belterra Village all faced increased development restrictions, including limits to impervious cover and requirements to retain runoff on site.

As a result, Armstrong said that projects take longer to build and are more expensive. Once completed, they are also more rewarding in terms of community benefits and property values, he said.

Bill Redd, executive vice president and senior managing director at Brandywine, which developed Garza Ranch in South Austin and the Broadmoor project in North Austin, said the community embraced the Garza Ranch concept when it was pitched in the mid-2010s because it was bringing amenities that were not yet available along South MoPac, while also offering parks and trails. There were, however, some concerns about added traffic and developing a formerly vacant property, he said.

“[Residents] might say, do we want to have towers we can see from the greenbelt, how much more traffic, that kind of thing,” he said. “That’s the give and take [Brodie Oaks will see] in the approval process.” 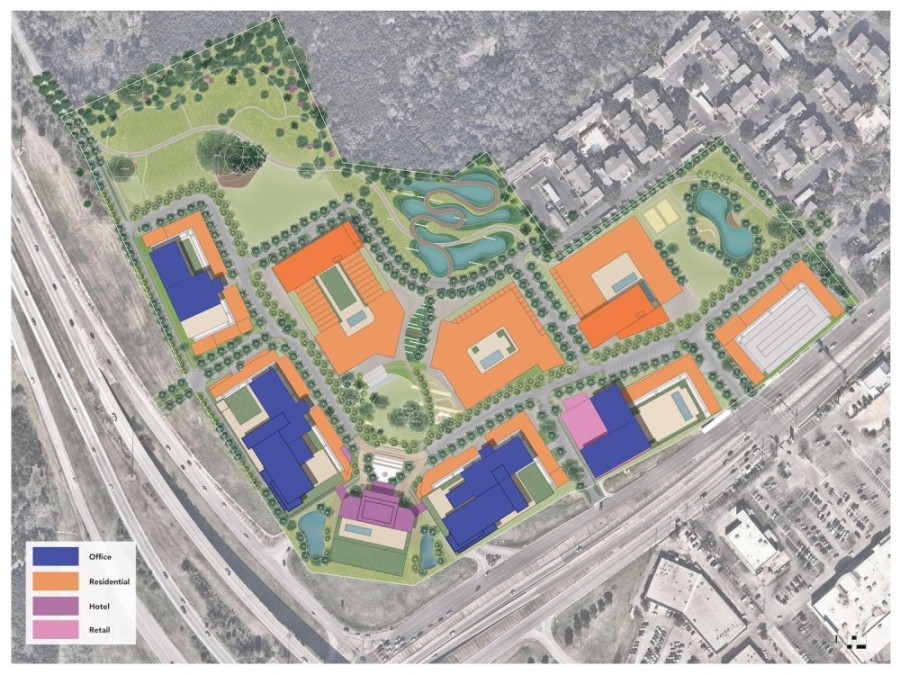 Barshop & Oles submitted a document called a development assessment to the city Dec. 3. From there, the developer will likely file a PUD application early in 2021, kicking off a process Burdette expects to last at least 18 months to 2 years, setting up construction in the latter part of 2023 or early 2024.

"It’s a long process. We’re prepared for that,” he said.

PUDs are designed for large or complex developments, generally larger than 10 acres. For developers, the advantage of the PUD is that it provides more flexibility; it is simpler than receiving individual zoning variances for each use of the property and it can provide additional benefits such as increased height or density allowances that traditional zoning cannot.

The community, meanwhile, can receive more benefits such as parkland or affordable housing. And for City Council members and staff, the PUD presents a chance to improve uses of land to be more in line with city goals. Often, the PUD process involves extended negotiations between the developer, neighborhood and elected officials to come to a compromise.

District 5 Austin City Council Member Ann Kitchen said there is an opportunity for the developer to improve the Brodie Oaks site with green space and affordable housing—plans include reserving 10% of any bonus space above the 60-foot base zoning height for affordable units.

She said that would be an improvement over the current strip mall, the likes of which are a common sight in South Austin.

“We have areas that have large acreages, spaces that are parking. They’re concrete. There’s just not a lot of use you’re getting out of them other than parking,” Kitchen said.

Other significant projects in Austin to go through the PUD approval process include The Grove residential project in North Central Austin, the redevelopment of the former Austin American-Statesman property along Lady Bird Lake, and Tesla’s gigafactory plans in Southeast Travis County.

Residents in the area will have a significant role to play in the PUD process, and the developers started reaching out to local neighborhood groups in December. Joan Owens, president of the Southwood Neighborhood Association, located south of Hwy. 290, said she hopes as the project moves forward, the developers keep neighborhood residents’ desires in mind.

“I hope to see better traffic management, and I would like for it not to destroy the small businesses in that area,” Owens said.

Locally owned tenants of the Brodie Oaks space include businesses such as ToddPilates & Barre, Texican Cafe and Pinthouse Pizza. Burdette said the future of those businesses is a “tenant-by-tenant discussion.”

Todd Gibbs, owner of ToddPilates & Barre opened his studio in 2012 in Brodie Oaks, and has since expanded to two other locations. Gibbs said he was not surprised to hear the news of the plans, and even though ample parking was part of what attracted him to the spot when he opened, he is interested in staying at Brodie Oaks through the redevelopment.

“That’s what happens when you live in an amazing town like Austin that’s growing so fast and so vibrant,” he said. “That’s what you’ve got to deal with.”

Nicholas Cicale contributed to this report.