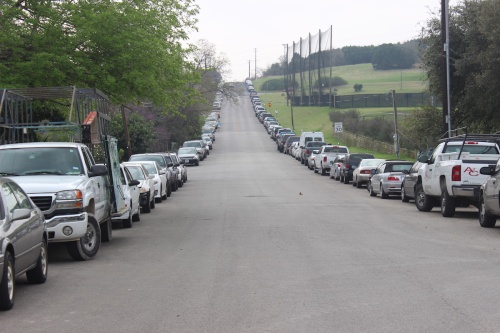 The often-overlooked Catholic private school St. Edward’s University is growing at rapid speeds, much to the dismay of some nearby South Austin residents.

The university campus is changing to keep up with the growth—school enrollment has gone from nearly 200 students in the early 1900s during the school's early days to 3,747 undergraduates today—by building new campus housing, renovating existing buildings and constructing a new operations building less than 100 feet from neighboring Sherwood Oaks residents.

The new operations building, coupled with the growth in student population and the increase in student parking fees, have Sherwood Oaks residents questioning how much the university cares about its neighbors and how much future growth will impede on their neighborhood.

“We realize that with some of our construction efforts, we’ve inconvenienced our neighbors, and we are sorry for that,” Johnson said at a recent community meeting on the school’s new campus master plan. “We want to make sure we’re the best neighbors we can possibly be.”

At the crux of the contention between the university and Sherwood Oaks is the campus’s new 12,000-square-foot operations building, which the university decided in 2006 would be built close to the dead end at the intersection of St. Edwards Drive and Carnarvon Street.

In multiple emails and meetings with university staff, Mathews and other residents paint a picture of elderly neighbors being unable to walk safely on the street, young residents with children moving out of the neighborhood and a constant inconvenience because of parking and traffic congestion they blame on the university, its students and construction workers.

“Is St. Edward’s intent to just run out the clock as the construction of the operations building comes to a close in hope that we will overlook another broken promise?” Mathews wrote to university staff about a request to prevent construction workers from parking in the neighborhood in a February email.

Neighbors say they oppose the building because they weren’t made aware of its pending existence. St. Edward’s University, as a private entity, was not required to alert residents of the new building under city code.

Last October, residents took their complaints to Sasaki Architects, Inc.—the firm designing the building—during a meeting that was supposed to be dedicated to discussions on the new campus master plan.

Sherwood Oaks resident Joe Farley said the neighborhood had no opportunity to voice its concerns regarding the new two-story operations building and the 18-wheeler trucks expected to come down St. Edwards Drive on a weekly basis to drop off supplies.

“We’re fresh off what we consider a huge insult to our neighborhood,” he said.

[video width="1920" height="1080" mp4="https://communityimpact.com/wp-content/uploads/2017/03/St.-Edwards-University-operations-building.mp4"][/video]
“This is not going to be a hub for all of our deliveries,” he said, pointing out the bulk of the campus’s deliveries go to the dining halls.

Garret Nick, who recently moved out of his Sherwood Oaks house after 15 years, said he has had a hard time getting anyone from St. Edward’s University to address neighborhood concerns, which go beyond the operations building into parking and speeding issues in the area that abuts the school.

“The mission of the school seems to have changed to turn a profit,” he said.

But Johnson said the university’s mission won’t change as it continues to grow.

“The big goal is to continue to be what St. Edward’s is,” he said. “This is by no means going to be the next [University of Texas] south of the lake.” Sherwood Oaks residents display signs in their yards opposing the operations building that will bring 18-wheeler trucks through their residential streets.[/caption]


The university was here first

When St. Edward’s University was built in the 19th century, the only thing surrounding the school was fields.

By the early 1900s, nearly 200 students attended St. Edward’s University, then known as Saint Edward’s College. By 1985—the university’s 100th year as a chartered institution—student enrollment had grown to 2,502 students.

It wasn’t until the late 1960s that the Sherwood Oaks neighborhood began construction on its homes, according to the Greater South River City Neighborhood Plan.

Meanwhile, the university’s campus—founded by the Holy Cross Fathers and Brothers—grew to accommodate students.

"He recognized there was tremendous opportunity to build something really special on campus," Demedeiros said. "Quickly [the university] saw a very targeted effort to grow the student body, and along with it a really carefully planned long-term strategic plan to grow the size of the campus."

In the 2005 city-adopted neighborhood plan, residents wrote there was a “concern” that St. Edward’s University is planning to double school enrollment and expand parking and baseball fields in the eastern part of campus.

Because St. Edward's University is private, the institution is not subject to public information requests and was not able to provide Community Impact Newspaper with projected enrollment numbers. Johnson said those numbers will be revealed as the new campus master plan is designed, but the goal is to remain a small liberal arts school.

"People come here because they don't want to go to UT," he said.

Demedeiros said the growing pains felt by some of the neighbors can be felt everywhere across Austin as the city continues to grow.

"Our students can come here and live on campus, but they can also infuse themselves in Austin and learn from the issues that the growth has been presented with," he said. This graph from the St. Edward's University 2011 master plan shows the amount of non-residential space needed.[/caption]

In 1992, when the university first began charging students for parking, permits cost $15, according to Burnotes.

Today permits cost $252 a year, or $158 a semester—a price residents insist is too much and should be woven into students’ $40,828 annual tuition so commuters aren’t deterred from paying. Instead, those commuters park on residential streets, according to neighborhood residents.

In comparison, parking permits for Central Austin's other four-year university, UT, range from $67 annually for lots on the eastern edges of campus to $780 per semester for students who want a spot in a garage near their residence halls.

Concordia University, a private school located in Northwest Austin, charges students $100 per year, and the expense is included in students' tuition.

Burnotes said about 3,000 permits are purchased each year, compared with 4,620 students currently enrolled.

The people parking in the neighborhood streets may be commuters who come on campus once or twice a week and don’t want to pay the full amount for parking on campus, according to Burnotes.


"Quickly [the university] saw a very targeted effort to grow the student body, and along with it a really carefully planned long-term strategic plan to grow the size of the campus."

Rosemond Crown, editor in chief of the weekly student newspaper Hilltop Views, said the parking lots close to academic buildings fill up quickly, and the school's parking garage—located next to the softball field along Woodward Street—is far away from classrooms, she said.

As a commuter, Crown parked all day along St. Edwards Drive to attend classes because she didn't want to pay what she calls the "outrageous prices" of parking permits.

In the southern part of campus, she said Woodward Street is also crowded with students commuters who want to avoid paying for parking.

"I understand the neighbors' frustrations, but honestly, students don't care," Crown said. "I think if the university brings [the neighborhood issue] to students' attention, then they would care."

To ease the impact to neighborhoods from non-residential street parking, Sherwood Oaks residents do have the option of investing in Residential Parking Permits, or RPPs, issued by the city. The application process involves getting 60 percent of neighbors to agree to RPPs. Each permit costs $15 and can be renewed yearly, and each home is eligible for up to four permits.

But some Sherwood Oaks residents say they shouldn’t have to pay for parking in front of their own homes. They say it should be up to St. Edward’s University police to monitor any illegal parking—such as parking too close to a stop sign or fire hydrant—in the neighborhood, especially during high-traffic events such as weekend baseball games.

But policing the neighborhood streets is not the university police department’s purview, Burnotes said. That responsibility falls under the Austin Police Department, which—according to senior police officer Shawn Rougeou—lacks the resources to constantly police the area.

“We have parking and speeding issues throughout the city,” Rougeou said. The future land use map was approved with the neighborhood plan in 2005.[/caption]

Residents say they’ve witnessed reckless speeding up and down St. Edwards Drive and the side streets for years, and they wonder what can be done to deter speeding.

Speed study reports obtained by Community Impact Newspaper through the Freedom of Information Act show on an average weekday in 2014—the most recent data provided by the Austin Transportation Department—95.8 percent of the cars driving westbound on St. Edwards Drive exceeded the posted 25 mile-per-hour speed limit, with the average speed hovering around 33.4 miles per hour.

Burnotes said St. Edward’s University Police Department is not equipped to monitor speeding, and APD doesn’t have the time or resources to invest in writing tickets on St. Edwards Drive.

According to the Austin Transportation Department, five speed humps costing a total of $20,000 will be installed on St. Edwards Drive from Carnarvon Street to I-35 this May or June.

No funding is available for speeding mitigation tools on Carnarvon Lane from Long Bow Lane to St. Edwards Drive, according to the city department's speed mitigation request listings.

In this case, the requested project will be reconsidered for funding for up to two years and will be ranked with the other unfunded projects. After two years, the request expires.

Solorzano said the council member is “keeping an eye on” the issue.

"We are certainly keeping apprised of the situation," Tovo said.

Johnson and Demedeiros agree they want the university's relationship with its neighbors to be a strong one.

"For me, it's more about looking forward," Demedeiros said. "We want to create those opportunities for dialogue and communications."

University staff is currently working on a new strategic plan for 2022 that will complement the new campus master plan. Demedeiros and Johnson said the new strategic plan calls for a greater involvement with the Austin community, particularly with businesses and organizations that can offer students more educational and internship opportunities.

Public input will be taken in March during roundtable discussions on the strategic plan—similar to community meetings on the campus master plan, and the steering committee leading the plan's development is slated to present the plan to Martin, the school president, in May.

"The only certainty about the university’s future is that it will be more challenging than any time we’ve experienced in our past," Martin said in a recent news release on the strategic plan.

A new 450-bed apartment complex is slated to open on St. Edward's University's campus this fall.[/caption]

The three under-construction projects from the 2011 campus master plan—a new on-campus apartment complex, major renovations for two historic buildings and the new operations building—will be completed by the fall.

St. Edward’s University will continue to seek community input for its next campus master plan with a meeting scheduled for March 23.

"I think [neighbors] are going to be happy [with the campus master plan]," Johnson said.

The St. Edward’s University governing board will likely adopt the plan in May, and it will be published by summer.

He said he is also working on more “flexible options” for parking permits that may include more pricing options for commuters who don't come to campus every day.

Gretchen Otto, president of the South River City Citizens neighborhood association, said she felt it was good for the university to hear from all of the residents who had concerns.

“It really comes down to what do they [St. Edward’s University] do now?” she said.

Correction: An earlier version of this story indicated East Hall was an academic building. It is a residence hall.
SHARE THIS STORY