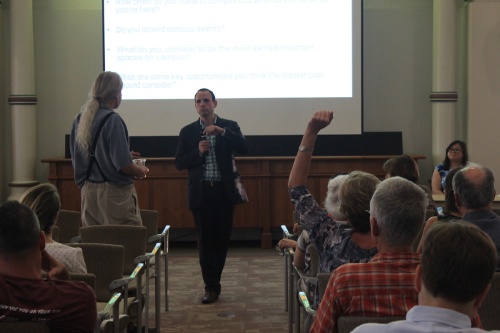 St. Edward's University began working on a new campus master plan this week, and when the architecture firm designing the plan asked the neighbors for their opinion on it, what the firm got instead were complaints about school facilities encroaching on residential property and street parking.

The meeting was marked by interruptions, raised voices and, at times, clapping, as a crowd of around 30 people—many of whom live in the Sherwood Oaks neighborhood, which borders the catholic liberal arts university off South Congress Avenue and Woodward Street to the north—asked why they weren't considered when the university decided to build its new operations building on St. Edwards Drive.

The neighbors say they have a problem with the new facility because once it's built, delivery trucks will park, unload and turn around in the street—about 84 feet from a residence's property line, according to site plans.

"We're fresh off what we consider a huge insult to our neighborhood," said Joe Farley, who lives across the baseball field on St. Edwards Drive.

He said the Sherwood Oaks neighborhood had no opportunity to voice its concerns regarding the new two-story operations building, which is slated to open in January and will house several campus support services, including the university police department as well as copying, facilities and postal services, according to the university’s website.

St. Edward's applied for and was granted a right-of-way waiver with the city of Austin to allow delivery trucks to turn around at the dead end on St. Edwards Drive. The university said it was not possible to build a truck turn-around area "due to existing site constraints and topography," according to permitting documents.

The operations building will sit at the intersection of St. Edwards Drive and Carnarvon Lane.

Mischelle Diaz, director of communications for St. Edward's, said the university is "well aware" of the concerns raised by Sherwood Oaks about the operations building. She said the university has tried to address some of the speeding and parking concerns by initiating conversations with the Austin Police Department about increasing patrol and installing speed monitoring signals.

The university also redirected athletics buses to a different part of campus after receiving complaints that the buses were idling in front of residents' homes, which sit across from athletic fields, Diaz said.

Other concerns raised included students parking on their streets, which has sparked a neighborhood discussion about the unwanted need for residential parking permits, or RPPs; lack of sidewalks around the edges of the university and speeding along Eastside Drive.

"It's really a public safety issue, and that's what we're trying to get across," said Elloa Matthews, who has lived in Sherwood Oaks since 1994 and serves as the area liaison for the South River City Citizens neighborhood association.

She said she wished there was a way for the delivery trucks to enter the university through another path and deliver the goods—such as toilet paper, office supplies and mail—to the operations building through smaller vehicles on campus.

Matthews said she also wanted to know the rationale behind choosing this location for the operations building.

Matthews said she is also upset with the city of Austin, which approved the facility and the right-of-way waiver without consulting Sherwood Oaks residents or going to the site of the new operations building. The new operations building is under construction on St. Edwards Drive near the dead end.[/caption]

Tyler Patrick, a principal with Sasaki Architects Inc., who conducted the meeting Wednesday, said his firm was briefed on the ongoing neighborhood issues before the meeting, but that his job was to focus on the future and gather input for the master plan.

"The most important thing is that the meeting happened, that there was open dialogue, and that people were honest," he said. "Any frustrations that they had aren't going to be abated with one meeting."

Diaz said the Sherwood Oaks residents' assertion is correct: the involvement of the community during the development of the current master plan that involved the operations building was not the same as it was for other aspects of the master plan.

This time it will be different, she said.

"The meeting on Wednesday was held specifically for the neighborhood groups, and we did that because the university is interested in moving forward in receiving their input as we move through the master planning process," she said. "We're thankful that they attended."