La Cocina de Consuelo, the small, local Mexican and breakfast burrito shop on Burnet Road, has one. They can be seen hanging outside popular downtown haunts, from Better Half Coffee & Cocktails to Star Bar. Even some restaurants in Lakeway have them.

Efforts to curb the coronavirus have forced restaurants and bars into a takeout and delivery model in order to earn income. To let would-be customers know, hundreds of local restaurants in Austin and beyond have prominently posted the same 2-by-3-foot, white, vinyl-like banner outside their establishment. 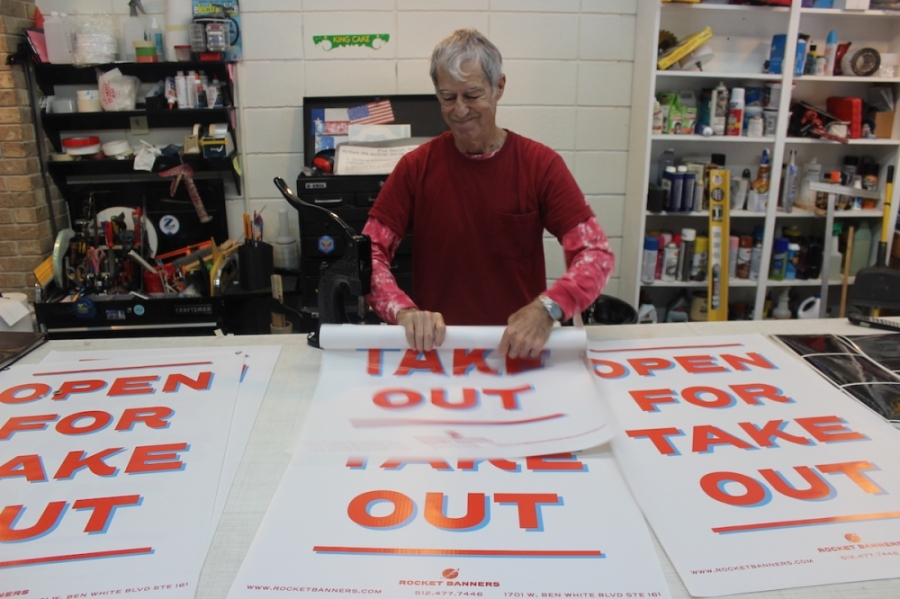 So far, David Zuefeldt said he and his small team at Rocket Banners have made roughly 750 of the posters. After the cancellation of South By Southwest Conference & Festivals in early March, Zuefeldts’s shop was left with a stockpile of unused sign materials. One of the shop’s designers, Evan Farias, said he drew up the design after messing around with some new fonts the company was trying out for a rebrand. Rocket Banners, unsolicited, has been dropping the signs off to any and all restaurants throughout the city that need them.

“We’re just cranking them out; it’s easy for us,” Zuefeldt said. “As long as people need them, we’ll keep making them.”
RELATED STORIES

• Coronavirus stories readers might have missed from the Austin area

Zuefeldt has been in the sign business in Austin for more than 20 years. Rocket Banners has been operating out of its 1701 W. Ben White Blvd. location—a repurposed indoor mall—since 2004.

Rocket Banners does signage for a range of industries, from construction sites to doctor’s offices, and is thus considered a supplier for essential businesses. Farias said the shop has kept busy, and the “Open For Take Out” signs, which started as a way to help small restaurants, have brought them new business, from larger chains such as Jason’s Deli and Thundercloud Subs.

“Some people need them,” Farias said. “Some people have never had to advertise or promote like this before, and now they have to.”

Though still in operation, Rocket Banners is also practicing social distancing. On the front door to the shop there is a sign about their popular signs: “Please drive around the mall, free banners at back entrance.” Around back is a stand with several rolled up banners, ready for free, contact-less pick-up, which Zuefeldt keeps available to anyone who needs them, throughout the day and night.
Coronavirus (COVID-19) Rocket Banners Austin Metro Business
SHARE THIS STORY