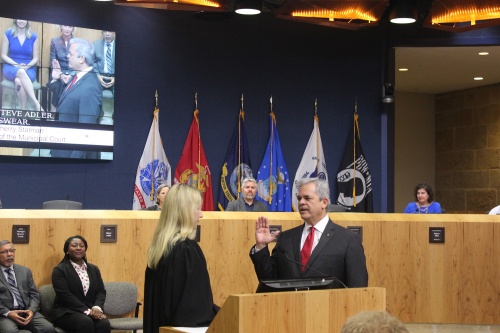 Our Town Austin, a special purpose committee created to try and recall Austin’s mayor and five City Council members, will begin canvassing the city for the tens of thousands of signatures needed to force a recall election, one of the group’s executives said.

Sharon Blythe, treasurer for Our Town Austin, told Community Impact Newspaper she and her team of “hundreds and growing” are “very confident” they can reach the signature threshold. Blythe, who said she’s lived in Austin for 30 years, said taxpayers are fed up with how the elected officials have handled the land development code, the city’s homelessness challenges and the city's spending.

“The one that pushed people over the edge the most was the homelessness issue,” Blythe said. “We just have to do something as citizens to try and pull the city back to normalcy. I think the City Council has worn people down so much that people stayed off but this homelessness issue [made them upset]. It’s not right to trash Austin like that.”

Amid a growing homelessness crisis, City Council in June voted to decriminalize public camping, sitting and lying down—bans which directly impacted the homeless population and drew criticism from legal experts and social justice advocates as creating tougher barriers to exiting homelessness. The move drew national attention, sparked a summer filled with debate and hyperbole over City Council’s decision and held homelessness as the most talked-about local issue.

After months of a mix of pushback and praise that included Texas Gov. Greg Abbott handing Austin an ultimatum regarding its homelessness crisis, City Council voted on Oct. 17 to amend the ordinances and implement further restrictions on public camping, sitting and lying down.

Blythe also said the city’s ongoing struggle to rewrite its land development code has helped galvanize the group. The effort to revise the rules over how city land can be used in the rapidly growing Texas capital has polarized the city since 2012. City Council voted to kill the project in August 2018, citing the growing toxicity of land use and development conversations in the city. The city resurrected the effort earlier this year and City Council is scheduled to make its first of three votes of approval in December.

Blythe said Our Town Austin is specifically going after the mayor and the five council members because they have the longest remaining terms of the 11-member dais. They were each elected or re-elected to new four-year terms in November 2018.

“The [other five] will be up for reelection in 2020 and we’re gathering candidates to run against those council members,” Blythe said.

The five council districts up for election in November 2020 will be District 2, District 4, District 6, District 7 and District 10. Those seats on the dais are currently held by Mayor Pro Tem Delia Garza, Greg Casar, Jimmy Flannigan, Leslie Pool and Allison Alter, respectively.
SHARE THIS STORY