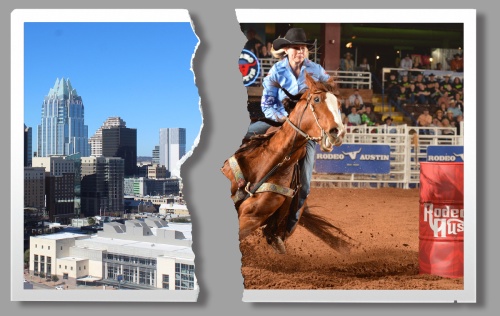 The city of Austin and Travis County are both pursuing hotel occupancy tax revenue for separate expansion projects, the Convention Center and the Travis County Expo Center, respectively.

Friday, Aug. 9, 2:03 a.m.: This story has been updated to include City Council action and discussion.

Thursday, Aug, 8, 11:50a: This story has been updated to include discussion between city and county leaders.

With an additional annual revenue stream estimated at $21 million in its sights, Austin City Council voted Aug. 9 to increase the city tax on all hotel stays within city limits from 7% to 9%.

Austin Mayor Steve Adler said the city will immediately begin banking 70% of that revenue stream—roughly $14.7 million annually—to help pay off a potential $1.3 billion expansion of the Neal K. Kocurek Austin Convention Center. The expansion was supported unanimously by City Council, but remains in the air due to a citizen petition aimed at blocking it. The remaining 30% would fund cultural arts and historic preservation budgets. Hotel occupancy taxes, known as HOT, or hotel taxes, are taxes levied on hotel guests.

Now approved, Austin hotel stays will be taxed at 17%, the state-mandated maximum—the state already levies a 6% tax and Austin voters approved a separate 2% hotel tax in 1998 to finance the 2002 convention center expansion, a debt which expires in 2029 but city officials estimate will be paid off by 2021.

The state and city will own 100% of the hotel tax revenue stream produced in Austin; however, Travis County wants—and is legally allowed—in to finance their own event center project. Last week, officials began the process of holding a referendum, for voters to decide in November whether to levy a 2% hotel tax. But with no available hotel tax revenue, and no future commitment from the city of Austin, officials fear the county could be locked out of hotel tax revenue for decades to come, thwarting plans to reconstruct the Travis County Expo Center and invest significant money into the county’s growing northeast quadrant.

Lack of communication has caused confusion between city and county leaders over each other’s tactics in accessing the annual $21 million revenue stream.

County officials say they never aimed to stop the expansion. County Judge Sarah Eckhardt said the plan has always been for the county to unlock a 2% levy after the city pays off its 1998 debt—Adler also said as much. However, Eckhardt said the city’s lack of solid commitment on the deal has county officials concerned, leading Eckhardt to characterize the expo center project as now "competing" against Austin’s convention center project in a letter to the state comptroller last week.

“All we’re trying to do is maintain the option for our discussion with the city,” Eckhardt said.

Discussions around expanding Austin’s convention center date back to the better part of the decade. In a 2015 long-range convention center master plan, architecture firm Gensler laid out a financing plan centered on using a 2% hotel tax levy to fund the expansion.

The plan only proposed mirroring the 2002 expansion financing strategy—invoke state statute Chapter 334, which requires a governing body to hold an election and ask voters to support levying a 2% hotel tax against tourists to fund a designated venue project. Although the 1998 debt was scheduled to expire in 2029, the report estimated that growth in hotel tax revenue would allow the city to pay the debt off as early as 2019, extinguish the existing 2% tax in exchange for a new one, and keep the local hotel tax levy stable.

The Gensler report was laser-focused on Chapter 334 route and even went as far to say that if the voters rejected the 2% tax levy, the convention center should consider changing its business model.

Around the same time, Travis County began discussing a reconstruction of the Travis County Expo Center and likewise commissioned a planning study from Hunden Strategic Partners. The study fell short of laying out financing plans; however, in one section, the report mentions the tax revenue a new exposition center would generate.

“There are five primary new local taxes collected, with one potential tax—the [2%] County Lodging Tax—that is not currently in place…Travis County has not demonstrated an interest in this funding source, if it is ultimately viable,” the report read.

Then, in early 2017, a new funding mechanism for Austin’s convention center expansion began to take hold. Rather than go the route of Chapter 334, wait for the city to pay off its debt and leave a 2% levy up to the voters, City Council could simply approve a 2% hotel tax levy through Chapter 351. The state statute also allowed the city to spend 30% of the tax revenue on cultural arts and historic preservation, two areas made vulnerable by the city’s growing affordability crisis. There was only one caveat. With the city taking 9% and the state taking 6%, there was only room for one more 2% hotel tax levy under the state’s 17% maximum. The city could take it as long as it remained available.

That same year, Eckhardt sent a letter on behalf of the Commissioners Court to the city indicating that they were keen to move forward on the project and the recommendations made in the Hunden report, and were now considering the levying its own 2% hotel tax.

“We didn’t get a response back from the city,” Eckhardt said, although she noted that she and Precinct 1 Commissioner Jeff Travillion did meet with the mayor to discuss it.

More recently, Austin City Council passed a resolution in May to direct the city manager to increase the hotel tax levy to the maximum 9%, which Eckhardt said she found concerning.

On July 3, Eckhardt proposed a new plan to City Manager Spencer Cronk and Austin City Council that the county swap ownership of the Palm School.

Appraised at $53 million, many city leaders see the 127-year-old elementary school as crucial to Austin’s historic fabric. Although the city owns the adjacent park, the county owns the former school property and most most recently used it as office space for its health and human services department.

City leaders have regularly urged Travis County not to sell the Palm School or its surrounding site. County commissioners have considered its value to the community, and in June approved a set of rules for the property that requires, among other things, most of the space be dedicated to cultural heritage or community uses and that the primary area be available to the public.

In exchange for the Palm School site, the city would offer ownership of the former HealthSouth physical rehabilitation facility, recently appraised at $20 million; the Travis County Exposition Center property, which it leases to the county; and rights to a 2% hotel tax levy after the city pays off its 1998 debt.

However, Eckhardt said there has been no formal response from the city to date. With a 2% hotel tax crucial to the Travis County Expo Center project, county officials decided to pursue a November referendum, which—if successful—would give the county one year to plan the project before levying the tax in 2021.

"We were just working our timeline," Eckhardt said.

Last week, county commissioners directed staff to begin planning for an expo center expansion, centered around levying its own 2% hotel tax. Taking the route of Chapter 334, Eckhardt asked the state comptroller to analyze the impact of a county hotel tax and report back by Aug. 19, the deadline to call a referendum for November 2019.

A city spokesperson said the move had nothing to do with the county’s aspirations. However, they acknowledged the move would block Travis County from accessing hotel tax revenue before the city’s 1998 debt expired in 2029.

“The factors for placing this item on the agenda are aligned with the long-standing discussion of expansion, the funding sources discussed and required for the expansion, and preserving those funding options,” the spokesperson said.

However, Adler said the narrative that city was aiming to get ahead of the county seemed contrived.

“The narrative that the city is trying to pre-empt the county by accessing the remaining 2% hotel tax revenue seems made up to me,” Adler said. “By approving the hotel tax increase on Thursday, we’re continuing on the exact same path we’ve been on for years.”

“This is not at all about the Convention Center,” Eckhardt said. “This is really strictly about the county’s struggle to capture the city’s attention on properties that we own or have mutual interest in [for which] we really need some resolution. There is a sense of entitlement with the city that is often very frustrating.”

Additionally, county officials emphasized the need to spread hotel tax revenue around the city instead of focusing it downtown.

“It is a priority for us to build the infrastructure in Northeast Travis County,” Travillion said. “The city hasn’t shown any interest in addressing these infrastructure needs.”

City Council passed the hotel tax revenue increase in the wee hours of the morning on Friday, Aug. 9; however, it was not without issue. Eckhardt, other county commissioners, and county staff attended the start of the meeting on Aug. 8 to try, once again, to get the city’s attention.

“All of us on the Commissioners Court have reached out to council members on the Expo Center, [hotel tax], Palm School and various other possibilities that would serve our mutual interests without much success to date,” Eckhardt said in a press release Wednesday. “Meeting the City Council in its voting session is our next best opportunity.”

Travillion said this week that if the city approves the hotel tax increase, "it will not be the end of the discussion."

"Although discussion with city representatives over the years have been encouraging, recent actions by the city indicate an intention to expand and extend the use of all HOT for these downtown blocks for 30 more years," Eckhardt said Thursday. "I ask you instead to commit on the record today to pay down the 2% HOT under the LGC by 2021 so that the county can invest it in the eastern crescent for the redevelopment of the expo center."

City Council Member Alison Alter, who said she wrote the section of the May 2019 resolution to which Eckhardt referred, said she did not interpret it to read the city would extend the 2% hotel tax levy tied to the 1998 debt for another 30 years. However, when pressed by Eckhardt to commit to paying down the debt and allowing the county to access the tax by 2021, Alter said she could not, as she did not have a financial analysis and did not know how much the convention center expansion would cost.

Other council members chimed in to say they believed the two projects could co-exist and that city and county collaboration is possible.

"That's great," Eckhardt said. "But what [the county] is really looking for is an enforceable commitment," from the city to pay down the 1998 debt and clear the path for the county to levy its own 2% hotel tax in 2021.

Council Member Leslie Pool added direction, approved by council, that City Manager Spencer Cronk work with the county on finding mutually beneficial strategies for the Travis County Expo Center. Although Friday morning's resolution mentioned the city's intent to pay off its 1998 debt by 2021, it stopped short of the enforceable commitment Eckhardt and the county were looking for.

Editor's Note: An 11:50 a.m. update to this story incorrectly stated City Council had passed the hotel tax increase at that time.
Council delayed the vote to later in the meeting.
SHARE THIS STORY