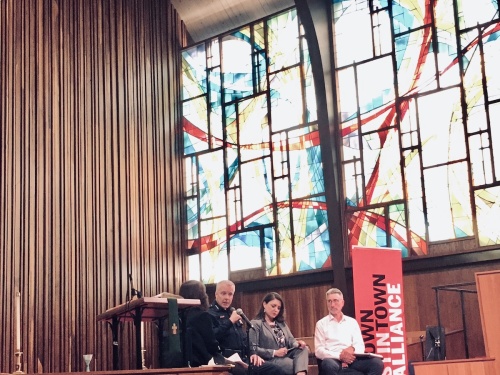 Since Austin City Council loosened local restrictions on public camping last month in an effort to decrease the legal burden on those experiencing homelessness, the issue has taken over community discussion.

In an effort to bring facts to a conversation that has attracted much hyperbole, the Downtown Austin Alliance—a downtown stakeholder group—brought Austin police Chief Brian Manley; interim Homelessness Strategy Officer Veronica Briseño; and the alliance’s vice president of investor relations, Bill Brice, together July 23 to talk about the ordinance changes and the issue at large in front of a crowd of 300 at downtown’s Central Presbyterian Church.

Although the ordinances played an early role in the discussion, the conversation eventually shifted to a point on which each of the three panelists agreed: a coordinated communitywide effort and response, not changes to ordinances, are the only way to truly address the city’s homelessness challenge. Such an effort between the community’s nonprofit, private and public sectors has yet to take hold, the panelists said.

Brice said the community needs an actionable plan that offers clear roles for players in the various sectors. Briseño touted the Ending Community Homelessness Coalition’s action plan to end homelessness, which City Council adopted; however, Brice criticized the plan as not actionable. He said the plan simply estimates the cost and pushes a housing-first agenda, but it fails to get specific on where the money will come from or how to realistically house the city’s homeless population.

The housing-first model is very expensive, and it takes a lot of time to build or provide new housing, and Brice said during that while people are waiting to be housed, they are languishing on the streets.

“Most of the time, we’ve looked at the city and said, ‘Fix this,’ but the city can’t do it alone,” Brice said. “Until we get that [community response] plan, we’ll be on the treadmill.”

Briseño pointed to the city’s success in halving youth homelessness and effectively ending chronic homelessness in the veteran community as examples that show the potential of the Austin community. However, Briseño said the community needs to ensure the nonprofits and the shelter community have the resources they need to be effective. She called Austin a “benevolent” community that could come together to address a “complex issue.”

The city cannot expect to arrest its way out of the homelessness issue, Manley said, but said the ordinance changes do not prevent officers from stepping into situations where a person is creating a dangerous situation or harm to another person.

Manley said his force is working to collect data on the calls they receive regarding the homeless population, but said he could not say at this time whether violent crime has increased or the police department has responded to more calls involving someone experiencing homelessness since the ordinance change in June.

However, he said his officers have observed more people are camping downtown and under overpasses and have more elaborate setups. A major challenge for the police will be determining how the community wants to respond to those who do not want to exit homelessness and prefer a transient lifestyle.

City Manager Spencer Cronk is expected to present detailed recommendations regarding the camping ordinance and the community’s response to homelessness when City Council reconvenes in mid-August.
SHARE THIS STORY