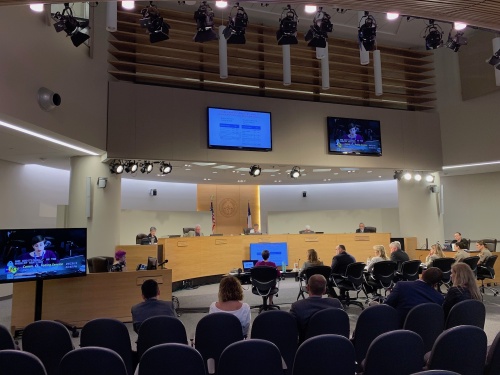 County commissioners discussed plans for an new women's jail at their April 23 meeting.

County staff requested the facility have 360 beds, an increase from the 336 beds recommended in a master plan adopted by the Commissioners Court in 2016.

Commissioners chose instead to approve 350 beds for the facility and include funding for a study on the housing needs of diversion programs, emphasizing they want to divert individuals from jail while also improving conditions for those who are incarcerated.

"We do need to treat women well, better than they've been treated in the past, if we really want to make a change in them and their future, especially when they have children who are depending on them getting better," said Commissioner Margaret Gomez, who represents Precinct 4.

Plans for a new, separate women’s facility have been ongoing in Travis County for years.

Commissioners were expected to vote on whether to issue certificates obligation for the facility in March. However, there is uncertainty about the county's ability to fund projects such as this in light of the Legislature's efforts to cap property tax revenue.

Nationwide, the incarceration rate among women has increased dramatically.

Travis County has seen this trend, too, according to a Feb. 27 memo from Allison Fink, planning project manager for the county’s planning and budget office.

“During the past year, Travis County has made efforts to decrease the overall jail population, especially women in jail, and as of February 2019, the population of women in our jail has held steady at a decreased level for several months,” Fink wrote.

The planning and budget office made the recommendation for increased capacity under the assumption that number, makeup and length of bookings in Travis County stay constant, as do the county’s efforts to divert individuals from jail.

The additional 24 beds were all recommended for high-need populations, such as individuals with mental health issues who are preparing for release.

In an April 15 letter to commissioners, County Sheriff Sally Hernandez recommended an additional increase, to 411 beds.

“I understand the county is seeking diversion, and am very much in support of diverting those who should not be in custody, but I also believe that until we have reduced the population over a longer period we should not plan/build to a number we hope will happen,” Hernandez wrote. “We know what we’ve had over the last four years and believe that it would be short-sighted not to use these numbers, and has the potential to put us right back into the position we are currently in with female inmates spread throughout the complex.”

Local activists have been critical of the plans for a new facility, regardless of total bed count.

"Instead of investing in more jails and institutions that further criminalize and jail Black and Brown people, the money at the county's disposal should instead be diverted towards strategies that end mass incarceration, including fair and equal representation and pre-arrest diversion," said Annette Price, statewide director of Texas Advocates for Justice, a network of formerly incarcerated people, in a statement.
SHARE THIS STORY