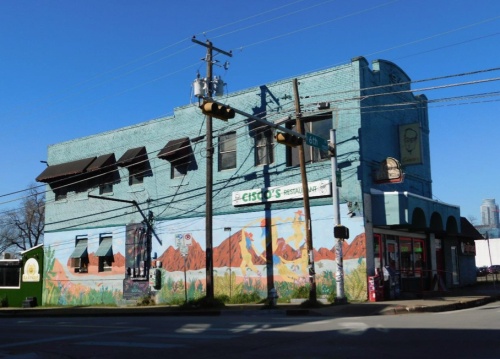 Cisco's Restaurant has become a legendary venue in Austin and has a long history of hosting the city and state's most powerful politicians.

Editor's note: A previous version of this article said Cisco's Restaurant earned historic landmark status through a historic landmark commission vote on Jan. 28. The building's application must first go through planning commission and the City Council before official designation is granted.

The restaurant’s building, which has stood at the corner of East Sixth and Comal streets since 1914 and has operated as Cisco’s Restaurant since at least 1950, could soon be guarded with some of the strictest redevelopment regulations available in the city. Local historic landmark designations are one of the only protections against a property owner’s right to demolish a structure—especially significant for Cisco’s, which sits in a rapidly gentrifying area of the city.

Commission member Kevin Koch said he was enthused to vote on the building’s historic landmark status. Koch was appointed to the commission by District 3 Council Member Pio Renteria, the council representative for the area where the restaurant is located.

“This is one of the core Austin treasures that make up the value of this city,” Koch said before casting his vote.

The merits for historic landmark status were threefold, as stated by Historic Preservation Officer Steve Sadowsky. The architecture of the 1914 brick building represents one of the first mixed-use developments; the restaurant’s back room has served as a gathering place for the local political elite for more than half a century, and Cisco’s was a central to the growth of the Mexican-American community in the area.

Sadowsky said he was “proud” to move this application forward.

Known by many for its migas plate, Cisco’s opened its East Sixth Street location sometime between 1949 and 1955, according to city documents and reports. The aforementioned backroom is rumored to have been where many deals were made by Texas lawmakers and regularly hosted the city and state’s most powerful politicians. Loyal customers included Lyndon B. Johnson, former Congressman J. J. Pickle, former Texas Gov. John Connally and former Austin Mayor Lester Palmer, according to city documents. Most recently, Renteria held his election night watch party at Cisco’s during December’s runoff against sister Susana Almanza.

Rudy Cisneros, original owner of Cisco's, became a local celebrity and powerbroker himself and eventually became known as the “Mayor of East Austin,” according to city documents. Politicians seeking East Austin support would first need Cisneros’s support. Although Cisneros died in 1995, his spirit has remained with Cisco’s as his bespectacled face with a cigar pressed between his lips is the icon on the restaurant’s signage.

“He was a dedicated philanthropist whose influence in the city, and particularly the east side, was unrivaled in his time,” a report from the city’s historic preservation staff said.

The city's planning commission is scheduled to vote on and expected to support Cisco's historic status at its Feb. 5 meeting, historic preservation planner Andrew Rice said. Rice said the application will go in front of City Council for a final vote some time between late February and mid-March.