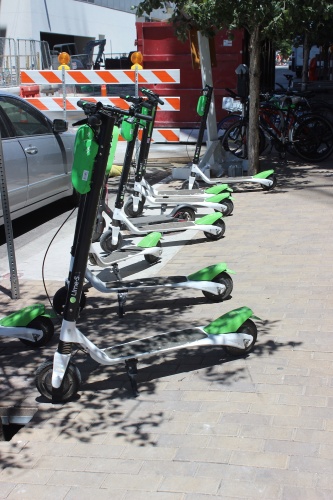 Lime, the company responsible for the neon green electric scooters that have peppered downtown streets in recent months, will lose 20 percent of its scooters for 30 days after Austin officials cited the company for violating fleet limits.

Lime is one of six companies that have dockless scooters zipping around the city. To keep from oversaturation, Austin implemented strict fleet limits for each company. Lime was approved for 500 scooters in the downtown area, and 4,500 scooters throughout the rest of the city, according to a memo from Austin Transportation Director Robert Spillar.

Spillar said Lime had deployed at least 1,124 scooters in the downtown area, so the city is reducing its approved fleet by 1,000 for 30 days. Spillar said Austin had warned Lime of its violations, but the company persisted anyway.

Lime's Director of Government Relations and Strategic Development Sam Sadle said the violation was an accident.

“Austin is one of a handful of cities with caps and unique in its caps based on geographic areas," Sadle said in an emailed statement. "Due to extremely high demand from users, we had an unintentional overdeployment of scooters downtown. We have worked around the clock to fix it, and look forward to continuing to work with [Austin]."

Editor's Note: This story has been updated to include a statement from Lime.