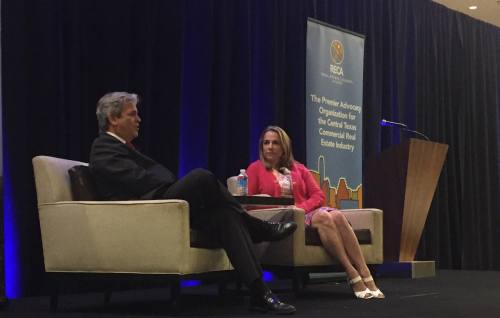 The Real Estate Council of Austin held its annual mayoral town hall Tuesday afternoon at the J.W. Marriott Hotel. Austin Mayor Steve Adler addressed the crowd, then participated in a Q&A with RECA Board Chair Pam Madere. Here are three points the mayor touched on in his remarks.


1. Adler provided some details around the crucial moments in law enforcement officers’ pursuit of Mark Conditt

On the morning of Wednesday, March 21, many Austin residents were glued to the news as reports surfaced that the man suspected to be behind the Austin bombings, Mark Conditt, had died after detonating a bomb in his vehicle in Round Rock.

Adler opened his remarks Tuesday by thanking the hundreds of agents who were working the case. He also provided some detail about what happened Wednesday morning just before Conditt’s death.

According to Adler, police had tracked Conditt to Round Rock and were ready to make an arrest but were waiting for equipment to arrive that would protect them from a potential bomb detonation. Before that equipment could be delivered to the scene, Conditt got in his car, started it up, and began to drive away.

Knowing they could not let Conditt leave, police blocked in Conditt’s car, losing the element of surprise, and officers rushed toward the car.

It was, Adler said, “the one thing that none of them wanted to be put in a position to do.”

“It was reflexive, and it happened immediately,” Adler said.

Adler added that he hopes the aerial video of those moments will be released to the public.

Adler is often asked about when Amazon intends to announce its plans for a second corporate headquarters, but he said he’s not able to help much in that area.

“I am not involved in secret meetings with Amazon,” Adler said, drawing a laugh from the crowd.

However, he did have some opinions to offer on Amazon’s potential fit with Austin. According to Adler, the discussion needs to start with how the tech giant’s move could help Austin address its major challenges.

“The scale of Amazon might enable us to do something about affordability and mobility that we could not otherwise achieve,” Adler said.

Amazon has announced 20 cities as finalists for its new headquarters, including Austin and Dallas.


3. Adler said the city needs to continue focusing on the challenge of transportation

Adler said Austin's $720 million mobility bond passed by voters in 2016 will help address transportation concerns, but there’s more to the challenge, and that starts with reducing vehicle traffic (not adding lanes on MoPac).

“We’re going to have to figure out how to get people out of cars,” he said.

.@MayorAdler: fear on adding 4 more lanes on Mopac is that home prices in Leander would skyrocket because demand would increase as people would be able to get in and out of ATX quickly. Eventually that would bring more cars commuting in&out of ATX&create same level of congestion.