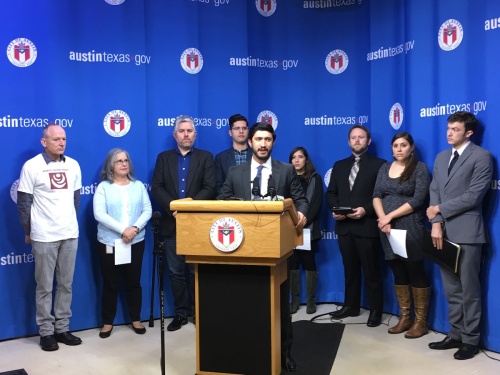 The fight to protect the cityu2019s immigrant community has stretched across 2017. Here, District 4 Council Member Greg Casar, in a February press conference, announced the cityu2019s plans to spend $200,000 to support immigration legal services in the wake of a stricter immigration crack down by the federal government.

Austin will join San Antonio in filing a lawsuit against the State of Texas over the constitutionality of the “sanctuary city” bill passed by the Texas Legislature last month.

Earlier in May, the Texas Legislature passed Senate Bill 4, sparking numerous protests, sit-ins and calls for resistance from some residents and city officials from across the state. The bill enables law enforcement officials to inquire about the immigration status of any individual and threatens to punish cities and government officials who fail to comply with the law.

On Friday morning, Austin city officials will file as an intervenor in a lawsuit filed Thursday night by the city of San Antonio, the Workers Defense Project and the Mexican Legal Defense and Education Fund—MALDEF—challenging the law’s constitutionality.

Two weeks ago, Austin City Council, in a separate action, also voted 10-1 to take the State of Texas to court and fight back against a preemptive lawsuit filed against the city by Texas Attorney General Ken Paxton.

“Supporters of SB4 have gone way too far,” District 4 Council Member Greg Casar said during a conference call on Thursday night. “[It threatens] the constitutional rights of Texans, from tiny border towns to the largest cities.”

Although Austin intends to join as an intervenor and not as an official plaintiff, Casar said Austin will publish its official position on the lawsuit on Friday morning following an official announcement of the action.

Austin is currently a defendant in a lawsuit filed against the city by Attorney General Paxton immediately following the state Legislature’s passage of the bill that cries foul against the city’s immigration policies. During Thursday’s conference call, representatives from MALDEF said the cases—along with other cases involving SB4—could be consolidated into one court battle.

The lawsuit filed on Thursday night lists several constitutional violations, from the due process and equal protection clauses of the 14th Amendment and the illegal searches and seizures clause of the Fourth Amendment.

The bill is expected to go into effect on September 1. Thomas Saenz, president and general counsel for MALDEF, said he expects the wheels to begin moving on the litigation, and expressed confidence that although the legal battle may not be over by September 1, the court would see enough constitutional questions to block its implementation during litigation.