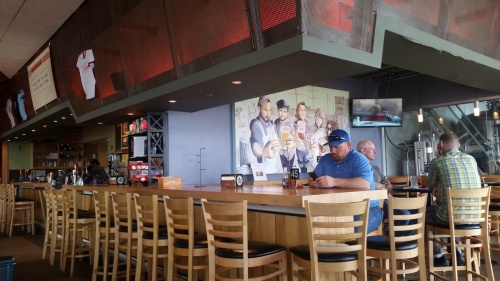 Black Star Co-op had its highest sales ever two days after putting out a letter seeking support.

Two days after sending out a letter warning it might close if sales didn’t pick back up, Brentwood brewpub Black Star Co-op had its highest sales ever, hitting $15,000 in one Saturday night.

By mid-week, Black Star was getting sales it would typically see during a historically good Friday or Saturday night, according to Larry Watson, a member of the Black Star business team who handles marketing for the brewpub.

But amid the rush of customers, Black Star's problems of operations and service haven't improved, Watson said.

Tucked away in a corner of Midtown Commons mixed-use development in the Brentwood area, the brewpub has stood since 2010, serving Texas-inspired pub fare with at least eight house beers and 16-20 guest beers on tap.

But the co-op goes back to 2006, when its founders began offering beer tastings, gaining capital and promising members their invested dollars would eventually pay off.

Black Star is one of few businesses in Austin that operate as a co-op, or cooperative, meaning members invest in the business, have voting power on big-ticket issues, receive beer discounts and eventually—if the business is doing well and investors have contributed a certain amount of money—receive dividend payouts.

A board of directors oversees Black Star Co-op, and four teams of workers who handle the areas of the kitchen, pub, beer and administration have a say in operations.

After a certain time, workers can join the workers’ assembly, which gives them a vote in large operating decisions. Watson said while the Black Star team constantly monitors the goings-on of the Austin restaurant scene and trends in the market, they didn’t expect to hit historically low numbers at the turn of the new year.

“It just wasn’t something we had prepared for,” he said.

Last year, member-owners made up about 6 percent of sales, a number Watson called disappointing.

“Membership should be stressed,” he said. “It’s an act of support.”

He said admittedly, most of the membership was built early on, before the brewpub opened its doors in 2010. Since then, he said people have changed lives, changed habits and moved away.

“I think it’s unfortunate that we felt the need to send out a call of support that was as inflammatory as it was,” Watson said, referring to the letter, which was composed by the workers' assembly and sent to member-owners via email. The letter then found its way to Reddit.com, Nextdoor.com and craftbeeraustin.com—eventually finding its way to several media outlets.

Watson said while the support has been amazing, the decision to send the letter—which was made quickly—may not have been the best thing to do.

Black Star has been struggling to adequately address some problems, including the issue of service, according to Watson. He said on busy days, the line extends beyond the door, service is slow and a number of possible solutions to this problem haven’t yielded results.

Now, with the sudden increase in business, there’s still no solution, and they are busier than ever, he said.

Other problems the brewpub has faced include lack of parking—there are few spots in front of Black Star, and Midtown Commons has one parking deck that faces the retail along Easy Wind Drive—and competition, Watson said.

When Black Star opened in 2010, it was the only business on the strip. Now, Black Star has to compete with Fuzzy’s Taco Shop and new game bar Vigilante, which is expected to open later this month.

Watson couldn’t speak to what changes would be occurring or when they would happen, but he said the ultimate goal was to keep the business’s values in mind.

Bethany Andrée, who is a member of the co-op and the owner of South Congress restaurant Snack Bar that shuttered late last year, said people need to be reminded of restaurants that have been around for a while.

"People are basically forgetting about places," she said. "If you’re not new, you’re not cool."

When she opened Snack Bar in 2009, she said she wanted customers to give their open and honest feedback about the quality of the food, the service and the restaurant as a whole.

She put her cell phone number on a place card that sat on each table. She regularly checked Yelp reviews, responding to each one and encouraging diners to return and give restaurants like hers a second chance.

“If people like a place [and] they have ties and memories to it, they have to remember to go there, and give them their constructive criticism,” Andrée said.

Black Star Co-op would like to thank everyone for the overwhelming show of support we received over the past few days. Which of course would not have been possible without our amazing 3500+ strong coalition of Member-Owners. You’ve inspired a renewed sense of possibility among our staff. Since we made our call for help we registered our highest day of sales ever (1/7/17, $15,000), received over $1300 in donations, and collected dozens of new memberships. The bolstered sales will help Black Star Co-op maintain the values we have championed since we began. Moving forward, it is now our responsibility to preserve and cultivate all of the goodwill we have received from this experience. In the coming months we hope to earn your continued support and business as we make improvements to the co-op. #blackstarcoop #austin #atx #community

Before getting on everyone’s radar for its possible closure, Black Star was recently in the news after declaring the brewpub a "sanctuary restaurant." But Watson said the title came with some misconceptions.

“It doesn’t mean that we’re hiring illegal workers,” he said, pointing out that it was, in fact, illegal to do so. “It’s a commitment [that] we’re going to stand by immigrant and minorities communities, organizations and customers,” he said, adding the restaurant wouldn’t accept any prejudice within its four walls.

Watson said being a sanctuary restaurant solidifies the brewpub’s values, which include giving their employees livable wages—starting salary is $12 an hour—doing away with tipping system, reducing waste and buying local produce and meat.

Black Star is one of few Austin-area restaurants that does not accept tipping. Thai Fresh, located on West Mary Street, also does away with tipping.

The letter caused three friends who regularly get together to temporarily trade in their usual lunch spot at Top Notch for a seat at Black Star’s patio on Thursday.

Steve Chase, Blake Burwell and Clif Haggard said they thought reaching out to member-owners was a good idea for the short term, but wanted to know what the brewpub was planning long-term.

“We’re protective of the neighborhood,” said Burwell, who lives nearby in Brentwood.

He said while Black Star’s food is good—if a little overpriced—the brewpub doesn’t immediately jump to mind when picking a lunch spot.

“There’s nothing that stands out,” he said.

Austinites and local businesses and restaurants took to social media in the days following Black Star’s announcement of its possible closure, promising to visit the brewpub more often and reminding others to take care of the mom-and-pop restaurants of Austin.

Beloved Austin brewpub is in danger of closing and wants your help https://t.co/czcBgCpUAQ via @culturemapATX

Tough times for Austin's Black Star co-op brewery. I always hoped this was a model that could work: https://t.co/ep88XNY4il