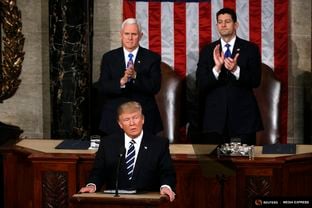 Democrats had soundly opposed the measure U.S. House Speaker Paul Ryan and President Donald Trump put forward, which meant the bill had little room for error within the Republican conference. Opponents fell along both ends of the GOP spectrum: Both moderates and Tea Party members helped sink the bill. Trump told The Washington Post on Friday afternoon that they decided to pull the bill.

Speaking to reporters Friday, Trump said that he was now planning to pivot to tax reform but added that he was open to working with both Democrats and Republicans on health care in the future.

U.S. Rep. Jodey Arrington, R-Lubbock, emerged from a Friday afternoon meeting of House Republicans disappointed. As the lone freshman among Texas Republicans, this was his first experience with GOP conference upheaval—an increasingly common occurrence at the Capitol in recent years.

Arrington helped push the bill through the House Budget Committee and called its trajectory "a healthy process."

"This is my first real taste of the dysfunction within our party, and why, when we have opportunities like this, we seem to have difficulty driving the ball down the field and scoring," the former Texas Tech football player said, using a gridiron metaphor.

"I just wish we had taken a vote. I understand why," he said. "There were two sides to this and leadership has broader issues to think about. And I respect that. But I think it's important that people are accountable for their decisions and representing their constituents, and I was prepared to be accountable for mine."

At least one Texan wanted time to process the afternoon's events before weighing in.

"I'm going to put my comment in the 'draft folder' and let it sit overnight before I hit 'send,'" replied U.S. Rep. Blake Farenthold, R-Corpus Christi, when asked for comment.

While Republicans were disappointed Friday, Democrats said the bid to repeal the Affordable Care Act was doomed from the beginning.

"I'm not surprised at what just happened," said U.S. Rep. Marc Veasey of Fort Worth. As part of the united Democratic opposition, he watched the drama as an observer. "It was a mess from the get-go," he added.

The political consequences of this setback are unclear in the immediate aftermath. There is no issue that drove the party's election fundraising, candidate recruitment and television advertising more than repealing the 2010 health care law. But the party could not come together on how to unwind the law. The newer legislation would have repealed the mandate that most Americans must have insurance, but would have translated into 24 million people without coverage, according to the Congressional Budget Office.

After failing to pass the health care law, loyal Republicans are publicly wondering about their party will govern moving forward, and consultants are bracing for how the intra-party fight over the last week could spill out into 2018 primaries — including in Texas.

Each man served in a key leadership role in a committee that had jurisdiction of the proposed overhaul. Each man spent most waking hours in recent days in hearings and selling the deal to the public.

In the closing hours of floor debate Friday, Brady shepherded debate on the floor in his capacity as House Ways and Means chairman.

The congressman compared this decision to the historically unpopular Wall Street bailout vote during the 2008 financial crisis in a Friday  morning interview with Fox News.

"I want to support him [Trump] but I can't support a bill that does more damage than good," he said.

Asked whether the 2010 overhaul would be the law of the land a year from now, Veasey, the Democrat, was succinct.

"Yes. Absolutely. I do."
via The Texas Tribune
SHARE THIS STORY