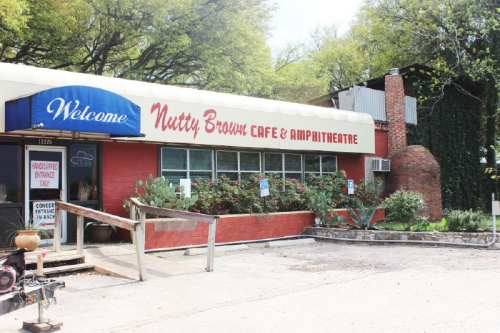 While the performance venue and restaurant will be relocating to Round Rock within the next year, Farr hopes to maintain the tradition and continue the history of the West Hwy. 290 business at its new home for years to come.

The original property was a confectionery and candy store called Nutty Brown Mills in the 1950s. Known for its pecan pralines, the store was operated by a family that lived on-site, Farr said.

“The owners lived in this building,” he said. “The family made candy in the morning, sold it during the day and then put the kids to bed upstairs at night.”

The 24-acre property was purchased by Bob Rotter in the mid 1980s with the hopes of building a zoo with exotic animals, Farr said. Some of the proposed zoo’s fencing and water lines can still be found near the rear of the property, he said.

However, permitting issues and conflicts with governing bodies prevented the so-called Cedar Valley Zoo from opening, and the Nutty Brown building was instead used as a storefront with ever-changing merchandise, including clothes and antiques. In the ‘90s the property was also used as a hair salon and a car lot, Farr said.

On July 4, 2000, Rotter opened the Nutty Brown Cafe, a restaurant with an outdoor patio and a small stage for artists to perform cover songs on the weekends. After a year in business he decided to look for a business partner who would purchase the restaurant but allow him to continue owning the surrounding property.

Farr said that in 2001 Rotter approached him, asking if he knew anyone interested in purchasing the restaurant. In March 2002 Farr, who had experience in the restaurant world, decided to purchase it himself, he said.

“I loved music but could never figure out how to make money off it,” Farr said. “I thought, if we build the stage bigger there are a lot of people who live out here with families who aren’t going to want to go to Austin for shows.”

The venue’s profile increased with KGSR’s “Live at the Nutt” music series, which featured local rock and country acts and attracted 700-800 people every Saturday for two years. Concerts were expanded to be held on other days of the week, Farr said.

After a Randy Rogers Band concert in 2005 sold 900 tickets, Farr built the large festival stage that is currently in place to open the venue to larger shows.

Rotter decided to sell the now 60-acre property to the H-E-B company in 2014. While H-E-B has been a hospitable landlord and has honored Farr’s lease, he said he knows the company most likely did not buy the property for the venue.

That same year, acquaintances in Round Rock approached Farr to gauge his interest in opening a music venue in the city. Farr said he fell in love with McNeil Park, located off the I-35 frontage road, the first time he saw it. He said the natural environment should maintain Nutty Brown Cafe & Amphitheatre’s unique draw.

Farr said he initially hoped the venue would be complete by the end of 2017. However, due to construction delays the new estimate is for an early 2019 opening.

Owner Mike Farr said the first artist he ever booked to perform at the Nutty Brown Cafe & Amphitheatre was San Marcos country performer Randy Rogers, whose band released their first album in 2002.

“In 2002 Randy couldn’t draw more than five people, but he quickly started picking up,” Farr said. “He played here once a month for a year and every other month a year after that. By his last concert of 2005 he sold 900 tickets, and we had never sold that many.