Some Austinites praise citizen-initiated petitions as essential; others say they show democracy's vulnerabilities 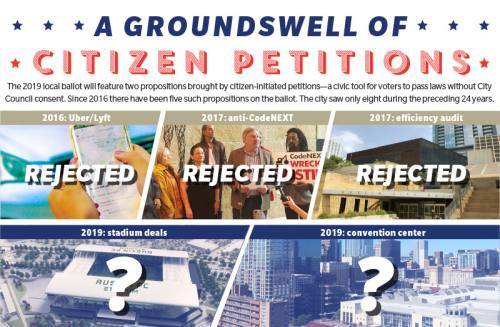 The 2019 local ballot will feature two propositions brought by citizen-initiated petitionsu2014a civic tool for voters to pass laws without City Council consent. Since 2016 there have been five such propositions on the ballot. The city saw only eight during the preceding 24 years.

This November, although there are no candidate races on the ballot, Austin voters will see a pair of questions that, for months, have riled up city officials, citizen groups and a wide range of stakeholders.

The questions were not brought to voters by the city government. Rather, they were brought by the roughly 3% of Austinites who wrote, canvassed for and signed a pair of petitions through a civic process known as citizen initiative—a process which some defend as democracy in its purest form, while others cry foul, saying it damages the democratic process. Austin’s Proposition A asks voters if they want the right to vote before the city sells or leases any city-owned property for a sports or entertainment venue. The petition that put it on the ballot began circulating as the city finalized a deal for a new Major League Soccer stadium at the tail end of 2018; however, legal experts have said the election would have no impact on the Austin FC stadium, which broke ground in North Austin in September. The main financier behind the ballot campaign, Austin Bold FC owner Bobby Epstein, has since dropped his support.

The city’s Proposition B, sparked by City Council’s May decision to explore a $1.3 billion expansion of the Austin Convention Center, asks voters whether they want the right to vote on convention center expansions costing more than $20 million. It also proposes the city recalculate how it spends its hotel tax revenue, 70% of which is currently spent on convention center operations and debt from previous expansions.

Such citizen-initiated ordinances are not new nor unique in Texas. Most of the state’s 400 home-rule cities—given rights by the state to operate under their own city charters—offer the tool to their citizenry, and election records show Austinites have taken petitions to the ballot for more than five decades. However, there has been a recent uptick in their use across Texas. This year’s election includes the fourth and fifth citizen initiatives in Austin since 2016. Election records show between 1992, the year of the landmark Save our Springs ordinance, and 2015, only eight initatives made it to the ballot. Some attribute this to a 2012 law change in which Austin decreased the number of petition signatures needed to earn a place on the ballot from 10% of the electorate down to the smaller of 5% or 20,000 signatures—the lowest of any major Texas city.

Some praise initiatives as a crucial check to the power of city government; others criticize the process as working to subvert the city’s system of representative democracy.

A tool or a weapon?

Citizen initiatives allow voters to pass laws without City Council consent. A group can draft a new ordinance, put it on a petition and canvass signatures. If the petition garners enough signatures to meet the city’s threshold, City Council can adopt the petition into law as written, or send it to the voters on the next available election date.

Local attorney Fred Lewis, who has led multiple citizen initiatives during his more than 40-year tenure as an Austinite—including 2017’s petition fighting City Council’s land-development code rewrite process and this year’s convention center question—said petitions are a safety valve when representative democracy “doesn’t function well.” He said, just like representative democracy, the petition process is essential but not perfect and could be wielded with good and bad intention.

“You get initiatives when the City Council is out of touch,” Lewis said. “You don’t always have them. You get them when they’re not listening. This council is not listening. They are not very deliberative, and they do not really listen to the public—they make up their mind and do what they want to do.”

When the community voted to transition Austin’s governing philosophy from an at-large system—everyone in the city votes for the mayor and each City Council member—to the current 10-1 system—10 council members are elected by geographical districts and the entire city elects the mayor—some, like local community activist Julio Gonzalez Altamirano, warned that the power brokers in the at-large system would use more citizen initiatives after the transition to continue pushing their own agenda.

“What’s happening here in Austin is much more tactical; it’s basically litigation,” Gonzalez Altamirano said. “It’s just another means of getting your way—if you have the resources, time and sanity to do it.”

Ironically, the 2012 ballot proposition to adopt the 10-1 system was brought by citizen-initiated petition, an effort led by Lewis. It was the same election when Austinites voted to lower the signature threshold to the smaller of 5% of registered voters or 20,000 valid signatures. The last time 5% of registered voters fell under 20,000 was in 1997, according to election records.

The Texas Municipal League, a cities’ rights organization, published a report on citizen initiatives ahead of 2019’s 86th Texas legislative session and warned of its vulnerabilities to well-funded special interests. The report said since cities are prohibited from spending public funds to advocate for or against ballot propositions, voters will likely “hear only the loudest voice on a given proposition” leading up to an election.

In 2016, special interests—Uber and Lyft—successfully funded a petition campaign to ask voters whether Austin should repeal a new law that required drivers for ride-hailing companies to undergo a fingerprinting background check. Voters rejected Uber and Lyft’s proposal at the polls, and the companies left town in protest until the Texas Legislature brought them back in 2017 by overriding Austin’s ordinance.


A government by too few?

Austin Mayor Steve Adler said citizen initiatives have a place in democracy and agreed that there are some “global policy issues”—he referenced 10-1 and 1992’s Save Our Springs ordinance that blocked development inside the Barton Springs Zone—that are more appropriate for a citywide vote. However, he said issues that are overwhelmingly supported by council should be left at the dais.

“If people don’t like what a [unanimously voting] City Council is doing, they should just vote them out of office, as opposed to doing this kind of alternative,” Adler said. “What could be more pure than a vote? I understand that [logic] at a theoretical level but, in a practical sense, it’s less democratic.”

The mayor said he was especially concerned because voter turnout suffers in off-year elections, such as this upcoming one, from the lack of marquee races. Since 2000, election records show Austin’s turnout in even-year November elections is 51%, while all other elections produced an 11.8% turnout. Election records also show, historically, West Austin turns out at a higher rate than East Austin­­, a central point behind the move to 10-1.

“Now we’re going back to a vote where all parts of the city don’t have equal power,” Adler said. “Different parts of the city will vote at higher percentages than others. So, the people who have an equal vote when the council votes will not have an equal vote in this election. Just having an election isn’t the determining factor on whether something is democratic or not.”

Lewis contended that off-year ballots only contain a few questions and allow voters to focus almost exclusively on the local issues instead of voters coming to ballots for statewide or national elections and casting an uneducated vote in the local races. Lewis also said state law requires valid petitions not adopted by City Council to be placed on ballots as soon as possible, and there was no plan for the vote  to be in an off-year ballot.

Although the signature threshold for citizen initiatives was lowered in 2012, there have been conversations in City Hall around increasing it again. Adler said the soonest the city could amend its charter and change the threshold is 2021, and the conversations remain in their infant stages.

District 9 Council Member Kathie Tovo strongly supports the initiative process but said increasing the threshold is a “conversation worth having with the community.” However, she emphasized voters, not petition signatures, decide an election.

“And we need to do everything we can to increase the number of people voting in all of our elections,” Tovo said.

Lewis acknowledged the process’s limitations but defended its place in a democratic society.