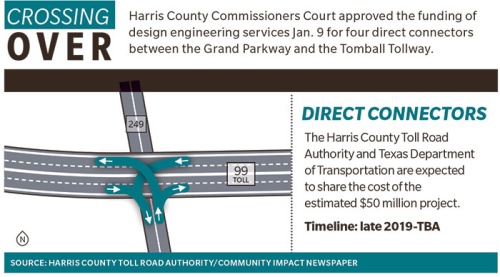 Access between the Grand Parkway and the Tomball Tollway could get a lot easier for commuters as construction is planned in late 2019 for four direct connectors between the roads, according to the Harris County Toll Road Authority. Harris County commissioners approved funds Jan. 9 for design engineering services for the project.

The Tomball Tollway—the tolled portion of Hwy. 249 in Tomball—opened to drivers in April 2015. Segments F-1 and F-2 of the Grand Parkway—stretching from Hwy. 290 to I-45—followed with a February 2016 opening.

Tyler said design work should take about 14 months to complete for the direct connectors, and the Texas Department of Transportation is expected to award the contract for construction in mid-2019. He said construction is slated to begin in the third quarter of 2019.

Bruce Hillegeist, president of the Greater Tomball Area Chamber of Commerce, said he believes the project is necessary to keep traffic moving fluidly in the Tomball area as more people continue to move to the area.

“The chamber wants to have visionary lenses on to see the growth of the community,” he said. “With the area growing the way it is, we can’t look at mobility as something that will just take care of itself.”

Tyler said the joint effort by HCTRA and TxDOT is budgeted to cost $50 million.

“HCTRA and TxDOT are currently negotiating the agreement for this interchange,” he said. “HCTRA will oversee the design of the interchange and [will fund] half of the cost to construct the interchange.”

Tyler said the new connectors would allow for easier travel because vehicles will be able to drive between the roads without going through signalized intersections.

“We’re looking at the direct connectors to provide a convenience and to help with the flow of traffic instead of cars getting off and on Hwy. 249 and then having to wait at red lights and then turn and go on,” Hillegeist said.

Hillegeist said he hopes additional direct connectors will be built for the remaining four directions of the interchange in the future.

“Tomball is really being noted as a place to be desired in which to live and have businesses,” he said.

Hillegeist said the community’s response has largely been in favor of the new connectors.

“Businesses and the community are really excited about this,” he said. “It’s going to save time and save effort."