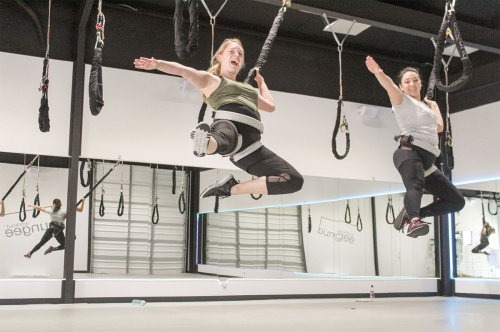 Class participants at Bungee Workout TX in Magnolia learn dance and cardio moves with the resistance of bungee cords.

Ana Ramirez said she opened Bungee Workout TX last November to satisfy a desire to try the low-impact exercise class but ended up filling a void. The Magnolia studio is the first and only bungee workout studio in Texas, she said.

Workout classes led by trained instructors focus on strength and conditioning by incorporating dance and cardio moves with the resistance of bungee cords, Ramirez said. After a warmup, participants are attached to a single harness for a one-hour workout. The program helps reduce stress on joints, she said.

“When a person is attached to the bungee harness, it takes away about 60 percent of the body weight,” she said. “But you are creating resistance because you are pulling down on the cord at all times. This [is] how you [do] cardio without the pain.”

While browsing social media last August, Ramirez said she stumbled on a video of a Thailand-origin workout class. As she found no similar classes in Houston, she reached out to Bungeeworkout, a Thailand-based company that recommended she become a franchise owner.

“This is really gratifying,” said Ramirez, whose sister, Isabel, helps run the business. “My parents have always taught us to work hard, try to do your best on your own and not to rely on other people.”

In addition to the Magnolia location, Ramirez said she holds the rights to open additional studios in Texas and the Southern states. She said she picked Magnolia due to cheaper leasing prices, high traffic counts along FM 2978 and a growing fitness community near Tamina Road.

“We want to be a part of this community,” said Ramirez, who is also a full-time university student.

Classes are geared for nearly everyone, and Ramirez said she hopes to add a children’s class in the future.

“You will see how easy [bungee workout] is,” Ramirez said. “You are more scared of the idea that you do not know how to do it or that you never did it before. But once you execute it, you will be amazed.”