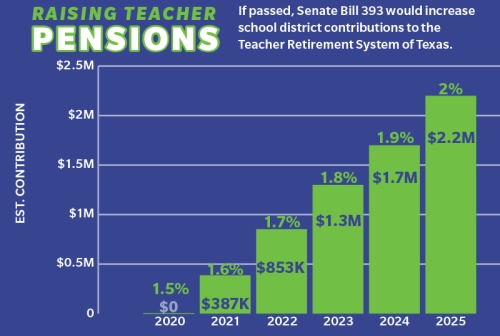 As a bill for teacher raises makes its way through the Texas Legislature, Fort Bend ISD is looking at how the change would affect its budget should the bill pass.

Senate Bill 3 was unanimously approved by the Senate on March 4, and if the bill is approved by Gov. Greg Abbott, it would provide a $5,000 raise in annual pay for full-time classroom teachers and librarians beginning with the 2019-20 school year.

If the bill is signed into law, the salary increase for 4,750 full-time teachers and 78 librarians in FBISD would account for about $24 million and an average pay raise of 8 percent, FBISD Chief Financial Officer Steven Bassett said.

“It’s simple—our teachers have not had a statewide pay raise in over a decade, and we know that they are being challenged by rising health care costs, the cost of living and inflation,” Huffman said in an email. “SB 3 will help ease those challenges by providing every classroom teacher in Texas with a $5,000 pay raise directly into their pockets.”

The bill was originally aimed at teachers, but Nelson added an amendment to include the 5,000 librarians across the state.

FBISD officials agreed teachers need a raise but thought it should be decided at the local level, according to a district presentation on legislative and budget matters given to the board of trustees at its Feb. 18 meeting.

Beginning salary for a FBISD teacher is $53,000, according to the district. About 42 percent of the district’s 11,398 employees are teachers.

The bill does not include raises for other district employees, nor does it provide for an increase to the district’s teacher retirement system expenditures.

“We recognize the need to increase teacher pay statewide. However, it is unfortunate that other employees are not included, such as nurses, counselors, classroom aides, custodians, bus drivers and the others who contribute to the success of our students,” Bassett said in a statement.

When librarians were not part of the bill, Bassett said it would cost $1.7 million to give them, 180 counselors and 79 nurses a similar pay raise.

The district also looked at what it would cost to give non-teachers—about 4,000 employees—a 4 percent raise and found it would cost about $7 million.

Providing counselors, nurses and additional staff members with a raise would essentially be an unfunded mandate of $8.7 million for the district, according to the Feb. 18 presentation.

The Senate budget includes $3.7 billion that covers teacher raises but expects that amount to increase to account for teacher retirement benefits, which it anticipates to be about $240 million over the next two years, Nelson said. Adding librarians to the bill adds another $53 million, she said.

“I found out during this process that librarians have to spend two years in the classroom, so I am more than willing to add them,” Nelson said.

Nelson also commended Huffman for her work on the teacher’s pension program, the Teacher Retirement System of Texas. Huffman filed Senate Bill 12 on March 4, which would increase pension contributions as well as provide a “13th check” to all retired school employees each fiscal year.

Another bill, Senate Bill 393, also affects contribution rates to the TRS, increasing them from 1.5 percent to 2 percent over five years. If no provisions were made by the state to help districts, FBISD officials estimate an impact of $4.2 million between 2020-2024, with ongoing costs of $2.2 million per year after that, Bassett said.

Meanwhile, SB 3 now heads to the House for consideration.

“The intent is to preserve teachers’ pension,” Huffman said during a Feb. 25 Senate Finance Committee meeting. “When we see the whole package, I think teachers are going to like it.”