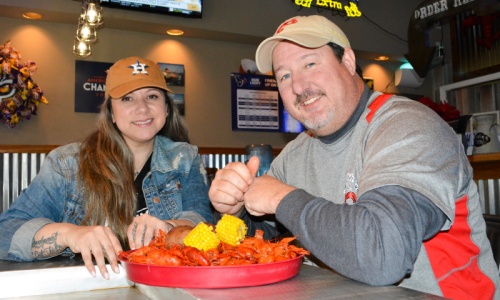 Danielle Smith and Greg Doulin sample some crawfish at one of their restaurantu2019s custom crawfish tables.

He prides himself on cooking crawfish in what he considers the Louisiana way: infusing flavor into the crawfish while it is boiling versus sprinkling flavors on top after the crawfish is cooked.

“This is true, authentic cooking,” he said. “We are one of the few restaurants in the area doing traditional Louisiana cooking, and we stick to it.”

In addition to the restaurant, Doulin still caters. The typical boil is about 10,000 pounds of crawfish, or three pounds per person, but he said he can double that in his biggest trailer.

They have created new features since opening such as a lunch option that includes a four-inch po’boy and either pasta or gumbo and a bag of chips so customers can sample more than one dish from the menu, but in a lighter portion size.

One of the restaurant’s popular dishes, the Dirty South, started out as something off-menu that Smith, the restaurant’s manager, would order for herself. It features grilled tilapia, butterfly shrimp and crawfish tails on rice with Cajun sauce and green onions.

“People came in and asked what I was eating,” she said. “I sold nine Dirty South dishes in one day.”

Other favorites include the oysters, grilled Rockefeller-style—made with cheese, breadcrumbs and spinach—or available on the half shell, as well as baskets made with fried or grilled fish and seafood alongside fries, coleslaw and toast. The grilled basket was added after customers requested a gluten-free option, Smith said.

And of course, the crawfish. The restaurant offers it only during crawfish season—February through early July—when the crawfish is caught wild.

“I’m so spoiled on my uncle’s crawfish that I can’t eat anywhere else,” Smith said.