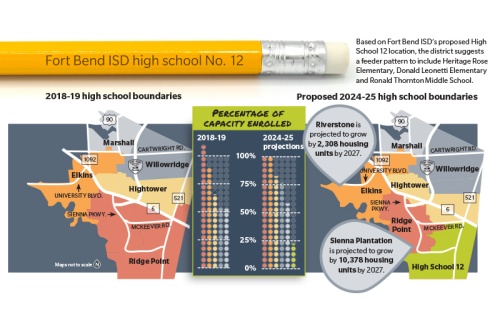 Fort Bend ISD is working to procure land for construction of High School 12 to relieve overcrowding at Sienna Plantation’s Ridge Point High School, where capacity for the 2018-19 school year is 111 percent, according to district figures.

FBISD’s board of trustees approved beginning negotiations to purchase the land in January, just as the district was finalizing plans to balance enrollment between five high schools for the 2019-20 school year: Ridge Point and Lawrence Elkins high schools, where enrollment exceeds capacity, and at Hightower, Thurgood Marshall and Willowridge high schools, which are underutilized.

“The identification of land for High School 12 was a critical turning point as we considered high school changes, as we didn’t want to make students unnecessarily change schools more than once in a short period of time,” FBISD board president Jason Burdine said via email.

The district halted the rezoning and instead initiated accelerated construction schematics for High School 12 so it could open in 2022—two years earlier than originally planned, FBISD Superintendent Charles Dupre said. Rezoning for High School 12 will begin when the school nears completion.

When the new school opens, it is expected to bring capacity at Ridge Point below 100 percent for at least six years. Funds for the new high school are part of the 2018 FBISD bond passed in November.

Now the district is in a feasibility period for the land that could last about 180 days, Dupre said. During this time, topographical studies are being made, and research is being performed to determine if the land is suitable to build on. In addition, the architect is working on preliminary ideas, and the district is putting out a request for proposal to hire a construction firm.

“We are in a very good place, and the waiting game is to get through procurement of the land,” he said. “We will close on the land at the end of the feasibility period in the next couple of months.”

During rezoning discussions for the five high schools, parents whose children attend or would be attending those schools reached out to the board asking them to keep attendance boundaries as is, Burdine said.

He said that is not always possible when areas of the district grow more quickly than others. FBISD built new schools or balanced enrollment in recent years as master-planned communities such as Sienna Plantation, Riverstone and Aliana grew.

Geralynn Prince, whose son will attend Hightower next year, was part of a focus group for the most recent rezoning. The option the board was set to approve in January included shifting a portion of Sienna Plantation to Hightower to relieve Ridge Point and moving students within walking distance of Hightower to another school.

She said she did not favor the option and said she wants rezoning to be more equal, but she understood what the district was trying to do.

Some parents, such as Stuart Jackson, whose son will graduate from Ridge Point in 2021, say the continued rezoning is the result of administration not following through on decisions.

“Overcrowding is a symptom of the bigger problem of planning which is always derailed because a big-enough group gets mad and mobilizes,” Jackson wrote via Facebook Messenger. “This results in the administration backing off on rezoning and rushing to build a school they didn’t plan for.”

He said his son told him he has not had any issues yet with crowded hallways, but his son said eventually it will be too crowded.

Meanwhile, board trustee Addie Heyliger echoed similar concerns at the February board meeting.

“We are not consistent with how we approach these issues,” she said, adding the administration needed to move more swiftly around actions.

With rezoning off the table for now, the district is working on easing congestion at Ridge Point.

FBISD put together an advisory committee made up of students, parents and staff at Ridge Point to discuss specific ways to address the growth, both short-term and long-term, Dupre said.

Some ideas include flexible scheduling and building use, bringing in portable restrooms and cafeteria space, staggering dismissals, monitoring hall traffic and adding a fourth lunch.

“We are learning to work with our community instead of just telling them how we are going to do things,” Dupre said. “We want them at the table.”

One solution aimed at attracting students from other schools to underutilized high schools and providing new opportunities for students is the addition of an Early College High School at Marshall and Pathways in Technology programs at Hightower and Willowridge. Each school has roughly half the enrollment of its capacity.

The ECH and P-TECH programs begin this fall and aim to improve instruction and support students, Burdine said.

“We are excited about the opportunities that these programs will provide to students, most notably a free head start on college and careers,” he said.

Applications are available on the district website for those programs as well as for another opportunity at the new James Reese Career and Technical Center, which will provide specialized high school courses for careers such as architecture and construction and manufacturing.

Elementary schools across the district are also feeling the squeeze. Capacity at five schools exceeds 100 percent, according to Population and Survey Analysts’ 2018 FBISD Demographic Update report.

In the northwest part of the district, construction on the new Malala Yousafzai Elementary School, in the Aliana community, will be completed in January 2020. Anticipating enrollment growth, the board approved plans in February to build on additional classrooms there as well as at James C. Neill Elementary School in the Harvest Green community.

In addition, the district revisited plans for Elementary School 53 to relieve Commonwealth Elementary, at Commonwealth Boulevard and Briarwood Drive in Sugar Land, and Sullivan Elementary in Riverstone, Dupre said. Discussion halted on this school—part of the 2018 bond—last year when land was not available, he said.

“Riverstone is built out—all of the land is taken up,” Dupre said. “Some possible sites were very expensive because they were slated for premium home sales. However, there is a piece of land we are looking at.”

Indeed, in February, the board authorized the district to use  eminent domain to negotiate the purchase of a 20-acre tract of land near Elkins. If procured, the district said the school would open in the 2021-22 school year.

Nearby Fort Settlement Middle School is also at capacity. The district said it will review boundaries and make a decision on shifting students from Fort Settlement to First Colony Middle by April.

The method enables the contractor to be hire earlier in the process and to work with the architect to design the construction plan as building designs are made.

“It’s a more efficient way to build,” Dupre said. “What will probably happen here is we will release contracts for some of the work early. That way, we can get things moving on the site.”