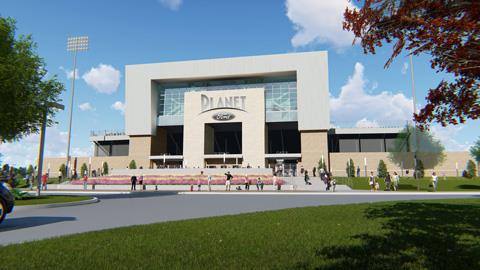 Spring ISD will host its first football game in its new Planet Ford Stadium on Oct. 31, followed by a grand opening celebration Nov. 12, the district announced in a press release Oct. 15.

The stadium, which is a replacement stadium for the district’s 51-year-old existing stadium, is part of SISD’s $330 million bond approved by voters in November 2016. The stadium was originally anticipated to open by late August for the start of the 2019 football season; however, district officials announced in August that the project had been delayed due to inclement weather.

The Oct. 31 game will be between Spring High School and Aldine ISD’s Eisenhower High School with kickoff at 7 p.m. Westfield and Dekaney high schools will also get a chance to play at the new stadium this season, with games planned for Nov. 1 and 8, respectively, according to the release.

“We are extremely pleased to be opening Planet Ford Stadium this football season so our players and fans can see what an absolutely beautiful facility this is,” SISD Superintendent Rodney Watson said in a statement. “I know the entire community has been anxiously awaiting ... the opening date, so I’m hoping everyone will come out to cheer our teams [on] as they close out the regular season.”

The Nov. 12 grand opening ceremony will begin at 6 p.m. and include fireworks, former NFL players, performances by all three SISD high school bands and dance teams, giveaways and members of the Randall Reed family and Planet Ford Employees—who have naming rates over the stadium.

“We’re very excited to be a part of this historic moment for SISD and Planet Ford,” Reed said in a statement. “It’s not every day that a school district opens a brand new football stadium, and we’re very proud to have our name on it and help support our schools. It truly is an incredible stadium and we can’t wait to see all the seats filled with fans.”

The $38.9 million stadium, located on a 117-acre parcel of land at 23802 Cypresswood Drive, Spring, features seating for 8,000 fans, a 19,650-square-foot field house, a 6,300-square-foot community room with a capacity of 300 and the SISD Memorial to honor service members from the Spring area. The stadium also features a state-of-the-art turf field, a video scoreboard system, concessions throughout and modern press box amenities.