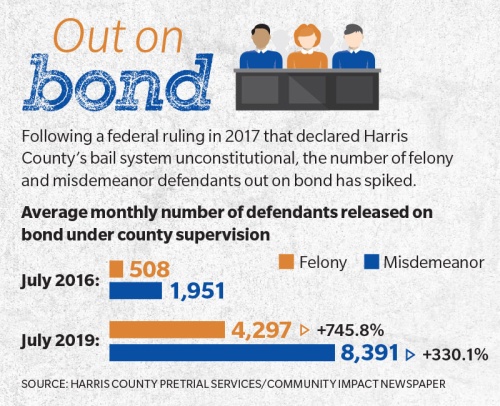 Harris County officials are grappling with safety and security questions in the wake of a landmark settlement that could make a county bail reform law permanent.

On July 30, county commissioners approved a settlement to address issues with the county’s bail bond practices. The settlement would continue policy reforms that went into effect in February that require the county to not hold misdemeanor defendants in jail if they cannot afford bail. It would also implement other initiatives to increase court appearances.

“[The settlement] ensures that we are spending our resources on real public safety rather than filling our jail with people who are only there because they’re poor,” County Judge Lina Hidalgo said.

“It’s not very fair to victims,” Cagle said. “[There is nothing in the settlement] to address the civil rights of victims.”

Although the settlement applies only to misdemeanors, the total number of misdemeanor and felony defendants released on personal bond in Harris County jumped 470% from 2015-18 and is continuing to grow this year, according to a report by Harris County Pretrial Services. The increase follows a federal ruling in 2017 that declared the county's bail system unconstitutional.

Three individuals charged with misdemeanors filed a lawsuit against Harris County in 2016, alleging it unfairly jailed poor misdemeanor defendants. In 2017, Judge Lee Rosenthal, chief district judge of the U.S. District Court of the Southern District of Texas, declared the county’s bail system unconstitutional. Although the county initially fought the lawsuit, commissioners eventually began working towards a settlement. In February, Harris County changed its bail practices to grant personal bonds for most misdemeanors, known as Local Rule 9.

The rule requires pretrial release of all misdemeanor arrestees—such as driving with a suspended license— excluding instances such as domestic violence or assault.

The county approved a settlement on July 30 for the original lawsuit, which mandates continued implementation of Local Rule 9 as well as requires the county to create initiatives to improve court appearance rates. It is pending final approval Sept. 19.

“All [of the defendants] are in agreement that this is the best solution,” Hidalgo said. “Everybody somehow [came] together and reached an agreement with the plaintiffs.”

However, as of Aug. 23, nine different officials and groups, including the Harris County Domestic Violence Coordinating Council and The Harris County Bondsmen Association, have written letters of opposition urging Rosenthal to deny the settlement.

Ogg and Cagle said Local Rule 9 already addresses the plaintiff’s concerns in the original lawsuit. They said the settlement—which could require the county to help defendants with child care and transportation to court, with a potential price tag of $97 million—is unnecessary.

“The district attorney has no objection to a settlement approved by this court requiring and monitoring the continued enforcement of that rule,” Ogg wrote in her amicus brief, or written concern sent to court, filed Aug. 22. “The proposed settlement seeks relief far beyond the scope of the original controversy, however.”

Cedric Claiborne, a bondsman at Greenspoint Bail Bond, said the bail bond industry has taken a hit from the recent reform, and he believes bondspersons can do a better job than the county in ensuring defendants show up for court.

“It’s ridiculous for them to say a bondsman is just out to get money,” Claiborne said. “We’ll send text messages; we’ll call a week before court to remind [clients] of court; [we’ll] have them come in every Wednesday to … sign in.”

In 2018, about 22% of misdemeanor defendants supervised by Harris County Pretrial Services had their bond revoked due to failing to appear for court, according to the annual report. By contrast, about 7% of Greenspoint Bail Bond clients fail to show up to court, Claiborne said.


Equality for the poor

Prior to reform, poor defendants would sometimes plead guilty to be released earlier—and face a criminal record—rather than await trial in jail and risk losing a job or home, he said.

“This area has so many people barely making it. … Being accused of a crime could mean the loss of a job, an apartment or home,” Elder said.

“[Bail reform is] going to be a quick fix to allow them to get out, but the larger problem is poverty,” he said. “Where are these people going to go? … They’re going to be [released]. … But how are we going to help them to get financially independent?”

On a countywide level, bail reform could alleviate overcrowding at the Harris County Jail, which houses more than 8,000 inmates on any given day, said Darryl Coleman, chief of Harris County’s criminal justice command.

According to data from the Texas Commission on Jail Standards, the average monthly number of people held in the Harris County Jail pretrial for misdemeanors dropped by about 40% from 2016-19, during the time reform initiatives were implemented.


Criminals out on bond

Mark Herman, the county’s constable for Precinct 4, which covers parts of Spring and Klein, said he has seen an increased demand on law enforcement over the past few years.

“It’s a higher demand for us out here,” Herman said. “We're having more and more suspected criminals out on our streets of Harris County.”

At a Houston Northwest Chamber of Commerce meeting on Aug. 9, law-enforcement officials voiced concern over the bail reform, saying they often rearrest defendants out on bond. Susana Salazar, a Houston Police Department sergeant who services the Greenspoint and Willowbrook areas, recounted an incident in which a woman called police on a man for drug possession.

“Within an hour, they went and got him—he had crack cocaine on him. They dropped him off; they did the reports,” Salazar said. “[The woman] texts me a picture of him at 6 p.m. that afternoon. He was back on that corner.”

In the amicus brief filed by the Harris County Deputies’ Organization Fraternal Order of Police Lodge No. 39, the organization said although Local Rule 9 states automatic personal bonds will not be granted for violent offenders, this is not always followed in practice.

“Under the bail rules, a person can commit capital murder and receive a personal bond at the discretion of the judge hearing the case,” the organization’s attorneys wrote.

Meanwhile, the number of felony defendants granted bond has trended upward in recent years, according to the Harris County Pretrial Services 2018 report. From July 2016 to July 2019, the average monthly number of felony defendants released on bond under county supervision increased from 508 to 4,297. Robin McIlhenny, an attorney for the Harris County Deputies’ FOP 39, said the increase in total defendants on bond is attributable to the political turnover in judges after the 2016 and 2018 elections.

But supporters of the settlement said there is no evidence that a cash bail system improves public safety. At the July 30 Commissioners Court meeting, Precinct 1 Commissioner Rodney Ellis cited a University of Pennsylvania study, which analyzed 380,689 misdemeanor cases filed in Harris County and found detaining individuals pretrial could make them more likely to commit crimes later on.

Ellis said the public safety was a key component of the settlement.

Shawn Arrajj and Vanessa Holt contributed to this report.