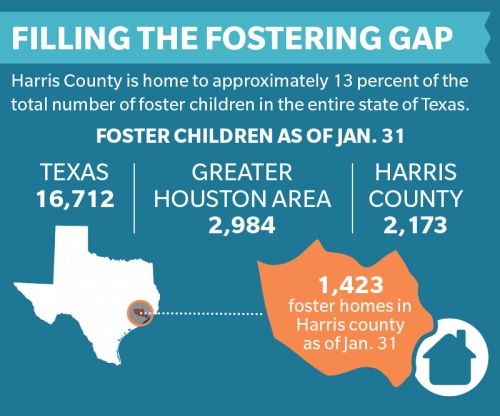 Inspired by her own upbringing, Spring resident Yolanda Potts has fostered more than 30 children over the past 16 years, in addition to having raised her own two children.

“I grew up in a low-socio-economic community, and if the foster system was anything back then like it is now, I probably would’ve been a product of the foster system—but I wasn’t,” Potts said. “The abuse and neglect I had experienced myself as a kid is what really made me want to become a foster parent. My compassion has always been for children.”

Potts’ home is just one of 1,423 foster homes in Harris County licensed to care for children who have been removed from situations of neglect or abuse and placed into to the conservatorship—or custody—of the state of Texas.

In Harris County and beyond, the demand for child welfare services in Texas is growing despite improvements made to the state’s child welfare system  since 2016.

The state of Texas has approved funding and undertook other legislative measures over the last three years to address a series of critical problems in the Child Protective Services system. Caseworkers were leaving their jobs at excessive rates, and caseloads were so high it made it difficult for caseworkers to check on some vulnerable children in a timely manner, said Tejal Patel, media relations specialist for the Texas Department of Protective Services.

Children’s advocacy groups in Harris County have acknowledged these improvements. Salaries in 2018 were one-third higher, turnover rates are down, and caseworker responses to reports of abuse or neglect are timelier than their recent lows in 2016, according to state data.

“Since the pay raises went into effect, there has been a drop in turnover among caseworkers,” Patel said. “We are grateful to the Texas Legislature for approving a raise for [those] who go out every day to ensure children are safe.”

Despite progress, there are still problems within the system, Patel said. With an inadequate supply of foster homes and increasing child abuse, the problems did not just disappear, she said.

Texas legislators have already filed several bills for the 86th legislative session, which began in January, regarding further improvements to the DFPS.

“I hope the legislature focuses on making sure the children’s needs are being addressed,” said Christine Weber, chief financial officer for Circle of Living Hope, a Houston-based child placement agency. “They’re the ones who are really impacted [by legislation].”

Patel said the ideal monthly caseload for a caseworker is between 14 and 17 cases. However, CPS investigators worked an average of 20.3 cases per month in Harris County in 2016 as the turnover rate of CPS investigators peaked at 21.6 percent that year.

“The low pay, the high caseloads—that’s been a continual problem. There’s a lot of burnout,” Weber said. “It impacts response times and forces caseworkers to prioritize. One bad judgment call could put a child in jeopardy.”

In response to the crisis, the Legislative Budget Board approved $150 million in emergency funding in December 2016 for the DFPS to hire 829 new caseworkers and give $12,000 salary increases to existing caseworkers. The following year, the 85th Texas Legislature took matters another step further.

Gov. Greg Abbott signed Senate Bill 11 into law in May 2017, which became effective Sept. 1, 2017. The law created a Child Protective Services Legislative Oversight Committee and outlined several additional DFPS requirements, including the shift to a community-based care model, which is being rolled out to a few geographic areas at a time in fiscal years 2018 and 2019. The model is intended to give more flexibility in meeting the needs of children and families, DFPS officials said.

Following the implementation of increased funding and new DFPS regulations in 2017, staff turnover rates improved, and CPS investigators in Harris County saw a decreased workload, averaging 17.9 cases per month, according to state data.

According to state data, 48,509 cases of child abuse were reported in Harris County in FY 2018, which is up 13.6 percent from the 42,688 cases reported in FY 2013. As of Jan. 31, Harris County had a total of 1,423 available foster or adoptive homes, according to state data. However, the county had 2,173 total children in foster care—roughly 13 percent of all foster children in the state of Texas.

“I think there is a lack of foster parents because of the requirements that are put on foster homes,” Potts said. “The process to become a foster parent was very strenuous—it involves a lot of background checks, classes and training—but it’s well worth it.”

As a result, many foster children are placed outside of their home county, Patel said.

“When kids are removed from their home—that’s already trauma,” Weber said. “You don’t want to disrupt everything in a child’s life if you can help it. But, if we can’t find a home in their region, sometimes that’s unavoidable.”

Weber said while Harris County is in desperate need of more licensed foster homes, respite caregivers, or individuals who provide short-term, temporary care for foster children, are also in short supply in the Greater Houston area.

“[Respite care] is not a long-term commitment, but it still gives people the opportunity to experience foster care and feel like they’re doing something to help,” she said.

Weber said while the majority of children who are placed through Circle of Living Hope were removed from their homes due to drug- or alcohol-related abuse by the child’s caregivers, child sexual abuse is another common cause.

Vieco-Garcia said while number of sexual abuse cases the center handles annually has remained at around 5,000 in recent years, the number of cases involving human trafficking has increased recently.

The state tried to address this issue when it passed SB 1806 in 2017, requiring child sexual abuse cases reported by professionals to be reported immediately to a children’s advocacy center.

“As much as we’d like to say we’re going to just end child abuse—I’m not sure how realistic that is,” Weber said. “But what we can do is ensure we get those kids out of those situations and make sure we can continually place them in safe homes.”

During a legislative advocacy meeting Oct. 23, Austin-based Texas Court Appointed Special Advocates for Children discussed its priorities for the ongoing legislative session. These priorities include requesting an additional $2.25 million in annual funding under the Texas Health and Human Services Commission and $643,600 for the 2020-21 fiscal biennium to fund family finding and engagement under the DFPS.

Several state representatives have taken measures to improve the guidelines for CPS caseworkers and the system itself. House Bill 72, filed by Rep. James White, R-Hillister, would allow for the continuation of Medicaid benefits provided to children with chronic health conditions adopted from the DFPS. HB 45—filed by Rep. Ina Minjarez, D-San Antonio—would create a mentor program for foster youth to develop better life skills and cultivate a one-on-one relationship with an adult.

Another DFPS change proposed for the 2019 legislative session is HB 141—filed by Rep. Mary González, D-Clint. The bill establishes a minimum education requirement of a bachelor’s degree for CPS caseworkers. If approved, these bills would take effect Sept. 1.

Weber said while these bills are promising improvements to the state’s child welfare system, she hopes streamlining the process to become a foster parent will also be prioritized in the 2019 session.

“We have to make sure that families don’t get overwhelmed by [legislative] changes,” Weber said. “If we start losing families ... and we can’t recruit new foster families, then the whole system is going to break down.”