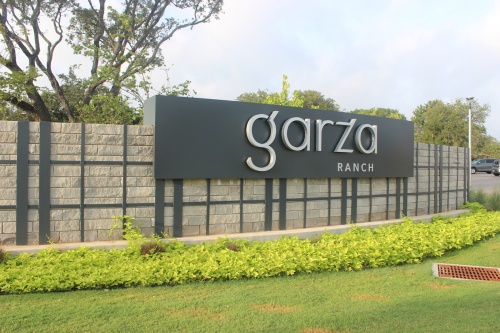 Garza Ranch is located off the MoPac service road near William Cannon Drive.

“The site has very significant visibility, and we wanted to make sure [the project] was visible, accessible and that we were creating something that will connect and be embraced by the surrounding community,” Brandywine Executive Vice President Bill Redd said. “We weren’t exactly sure what its components would be when we first started planning, but as it has developed what we have there is a nice mix of uses.”

Total build-out of Garza Ranch is expected by the end of 2021, he said.

Following the trend to create projects that combine elements of “live, work, play,” Brandywine Realty Trust developed Garza Ranch to include living units, offices and recreational spaces. The office, hotel and multifamily aspects each are being designed to offer a product not typically found in Southwest Austin, Redd said.

“Once [neighborhoods] understood what was going to be in Garza Ranch, they embraced the project because they thought it would provide needed services,” he said. “If you go south of Loop 360 [on MoPac], there’s a dearth of office product and hotels without our project.”

A site plan and recent photos of the project can be viewed below.

Alexan Garza Ranch—the multifamily element of the project being organized by Trammell Crow Residential—is on schedule to open its first units to tenants in September, according to the community’s leasing professional, Cody O’Dell. He said the community will be about 10% leased when opened, while construction will continue on the other wing of the complex. All units should be ready for tenants by early 2020.

“We’ll have one of the first mid-rise apartment buildings in the area,” O’Dell said. “The location is prime and in proximity to everything, with short commutes and businesses in the area.”

The development includes a mix of floor plans that range from 577-1,262 square feet, with rental prices from $1,295-$2,260, according to Trammell Crow Residential.

The first office building at Garza Ranch is on schedule to open in February, according to Redd. The building will be used as the Austin headquarters for SHI International, a global information technology products and services company.

Marketed as a boutique hotel, the Aloft hotel by Marriott is being developed by Pathfinder Development and is set to break ground this fall. With a construction timeline of about 12 months, Redd said the hotel should be complete by the end of 2020 or early 2021.

Garza 2—the second office building and final phase of Garza Ranch—could also break ground this fall. While no tenants are under contract, Redd said his team expects final permitting to be completed in September or October, with construction beginning soon after. Tenants could include one group that leases the entire building or multiple tenants that split the campus, he said.

“It’s going to be a very visible four-story office building,” he said. “It’s a unique design and a little different than anything else we’ve built in town. It’s a low-rise office and a class of office building you don’t often see in the suburbs.”

Although typical “live-work-play” developments have a specific commercial component to them, Garza Ranch does not. However, Redd said the hotel, when built, will have coffee, light fare and a bar available in the lobby, while SHI International will have an on-site dining area for employees.

Although plans are not finalized, Redd said Garza 2 could also include a restaurant if the right tenant comes along with interest, and food trucks could be added to the site in the future.

“Garza Ranch is going to really transform this area into a destination,” O’Dell said. “Austinites will consider coming because of the walkability, the central commons area and services here.”

Due to the project’s proximity over the Edwards Aquifer, about 10 acres of the property is being preserved close to its natural state as green space for water retention and to reduce runoff.

An additional 2 acres will be used as a public park and gathering space located at the center of Garza Ranch called Garza Commons. The park is nearly complete and will open to the public this fall once Alexan tenants begin moving into the apartment complex.

The property is also located along the Violet Crown Trail, a 30-mile pedestrian path under construction south from Zilker Park in downtown Austin to Hays County. Redd said the trail will connect residents in the community to natural areas in South Austin. The trail also connects to “urban trails” and sidewalks along William Cannon.

“When we build these projects, the goal is not simply to do something that only benefits us or our partners, but benefits the entire community,” he said. “We see the central commons as a place with public gatherings, concerts and for the community at large, and the trails as a way to embrace the surrounding environment.”

To mitigate the potential traffic impacts and added vehicles the development could bring, Redd said Garza Ranch has multiple access points, including two on the MoPac frontage road and two on Ben Garza Lane.

Garza Commons’ connection to the Violet Crown Trail and urban trails also provides options for those working and living at the development to walk or bike to nearby retail and restaurant offerings on William Cannon.

“Everything you do in Austin, everyone is concerned as they should be with traffic and transportation impacts,” he said. “We did everything we could to provide multiple ways in and out of our project to assist in that issue.”

Some pedestrian accommodations adjacent to Garza Ranch are being developed by the city of Austin’s Corridor Program Office traffic through the 2016 Mobility Bond. According to the city, the bond funds improvements for William Cannon, including the creation of shared-use paths separated from the road by a buffer. New medians, improved turn lanes and new striping are also proposed near the MoPac intersection to reduce traffic and improve safety. Construction could begin in 2021, according to the city.

“Once everything is complete, this is going to be a major hanging out and stopping point along the trails,” Redd said. “We’re very excited, and ultimately we view this project as accomplishing what we hoped to achieve, which is a state-of-the-art, mixed-use project that would both enhance and be embraced by the overall community in Southwest Austin.”