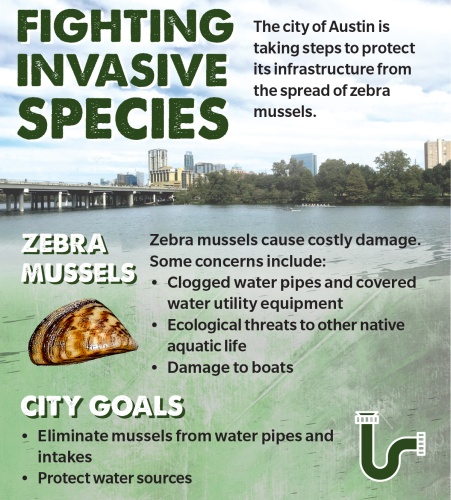 The city of Austin is taking steps to protect its infrastructure from the spread of zebra mussels.

Two months removed from foul-smelling and -tasting tap water being distributed through South Austin pipes due to the presence of zebra mussels at a water treatment facility, Austin Water officials said they believe solutions are on the horizon that will prevent similar events in the future.

The foul water was created when a transmission main that contained mussels was drained for maintenance, killing the animals, Water Treatment Manager Mehrdad Morabbi said. Austin Water was not aware of the mussels’ presence, and when the main was brought back online, the animals created the smell and taste, he said.

“The water was still safe to consume and use, but it’s very difficult to use water that is not palatable,” Morabbi said. “That is something we as Austin Water are putting in barriers to prevent that from happening again. That caught us by surprise, and we were not prepared for and something we are going to avoid in the future.”

The zebra mussel is an invasive species that is present in Lake Travis and Lake Austin, the main sources of water for Austin and the surrounding areas. Mussels multiply quickly and attach to surfaces, which could damage and destroy water infrastructure. By attaching to boats, they are easily moved to new bodies of water.

Morabbi said there is no cost-efficient way to remove mussels from local lakes and rivers, and solutions would ultimately have to come globally, not just from Austin. However, there are techniques the city will be implementing to protect its utility and water quality.

While the city of Austin aims to curb the spread of invasive species such as zebra mussels, it also works to protect native tree and animal species threatened by habitat loss.

On Feb. 6, a lawsuit to remove the golden-cheeked warbler from the federal endangered species list was rejected by a U.S. district judge, preserving the bird’s endangered status.

The Texas Public Policy Foundation filed a lawsuit against the U.S. Fish and Wildlife Service in June 2017, claiming updated scientific data shows the warbler is no longer in danger of extinction, and the government should direct its conservation resources to other species. In a statement, the foundation said the removal of the golden-cheeked warbler would restore the rights of landowners to effectively manage their own properties without federal oversight.

Melinda Mallia, Travis County natural resources program manager, said the county did not believe the data provided by the TPPF was sound. Since the 1990s, the city of Austin and Travis County have operated the Balcones Canyonlands Preserve and other conservation areas to protect the species.

“We have to continue carrying out our legal obligation for the Balcones Canyonlands Conservation Plan,” she said. “Even if the warbler had been delisted, we still have a plan based on a federal permit. That is an obligation Austin and the county took on.”

Safety around native animals, such as coyotes, as they become more integrated into their new urban areas also poses challenges for residents.

Sunset Valley Police Chief Lenn Carter said every few months, coyote safety becomes a popular topic within the city. Earlier this year, Sunset Valley residents reported a number of sightings within the South Austin city. This comes after multiple coyote attacks have been reported in North Texas since December as the animals become less afraid of humans.