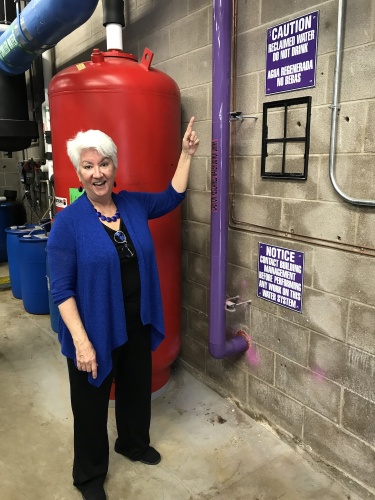 Commissioner Brigid Shea, pictured here in May 2018, helped spearhead the reclaimed water system, or purple pipe, for the county.

Correction: Travis County initially reported that water savings with the project will be equivalent to taking 15,000 homes off of city water. The county clarified that number on May 11 to 150 homes.

Travis County is set to save an estimated 10 million gallons of water per year and also help save thousands of dollars in taxpayer money with its reclaimed water plan for cooling.

During a press conference Tuesday, Commissioner Brigid Shea, whose district represents the most urban portion of the county, said the city of Austin extended a purple pipe of treated wastewater, or reclaimed water, along 11th street in downtown Austin as part of the plan.

The water savings is equivalent to taking 150 homes off of city water permanently, Shea said. All the engineering work and construction it took to build the connection will be paid for in a little over 8 years. She said the plan will also help save over $136,000 a year in taxpayer money.

The reclaimed water system has potential hook up for other major commercial buildings in downtown Austin and could save owners up to 40 percent of water cost savings, Shea said. Assistant Director of Austin Water Utility Daryl Slusher, who helped spearhead the project for the city, said the University of Texas has two cooling towers currently hooked up and the county has began ongoing discussions with them about hooking up more. The Texas State Capitol and the Governor’s Mansion are also in discussions about connecting to the system.

The county‘s Granger Building and Courthouse have already been hooked up to the system. The county administration building system at 700 Lavaca Street is currently under construction. The criminal justice complex and Gault building are under procurement, according to county officials.

Shea said the goal is to conserve water for the future.

“I think everybody remembers the 2011 drought when Lake Travis began to look like a puddle,” Shea said. “We know we are going to be hotter and dryer in the future and this is just one of the really impactful things we can do to conserve water.”