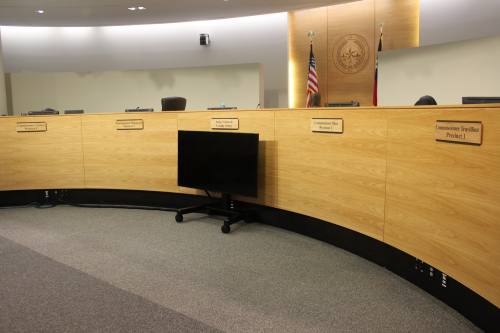 Commissioners debated a number of transportation improvement measures that they hope will solve the gap in access for unincorporated areas of the county.

Travis County will begin negotiations to create an interlocal agreement with the Central Texas Regional Mobility Authority, or CTMRA, to construct two safety projects identified as part of the 2017 bond program, following a 4-0 vote and one abstention from commissioners Tuesday afternoon.

According to county documents, the Elroy Road Widening project will convert the existing two-lane roadway from McAngus Road to Kellam Road into a four-lane divided roadway with bike lanes and sidewalks. The project crosses a large flood plain and will include a bridge structure to reduce the probability of flooding and will provide an evacuation route during flood events. The project will also add east and west roadway capacity in the region. Funding includes $4.4 million for design and right-of-way, and $24.3 million for construction.

The Ross Road South project will widen the existing two-lane roadway from Pearce Lane to Heine Farm Road to a four-lane divided roadway with bike lanes and sidewalks, county documents stated. This project will add north and south roadway capacity and safety in the region by providing bike and pedestrian facilities to connect several nearby neighborhoods with local schools. Funding includes $1 million for design and right-of-way, and $3.6 million for construction.

County staff said the agreement states the county will fund the project and CTRMA agreed to manage the design, procurement and construction of the project.

Despite the county’s previous successful collaboration with the mobility authority on other projects in the past, County Judge Sarah Eckhardt and Commissioner Brigid Shea expressed some concern with CTRMA handling so much of the project.

Shea, who abstained from the vote, said she felt the mobility authority's handling of the North MoPac project was poor. She said there was also a possible of a conflict of interest with hiring an engineering firm that both provides advice on county construction projects and then often bids and does projects for CTRMA.
“If [the agreement] still appears to show a conflict of interest I will not support the ILA that will come to commissioners for approval,” Shea said. "I would also like some assurance from CTRMA that the issues that plagued the North MoPac project will not afflict our county projects."

The final agreement will be brought back to commissioners for approval.